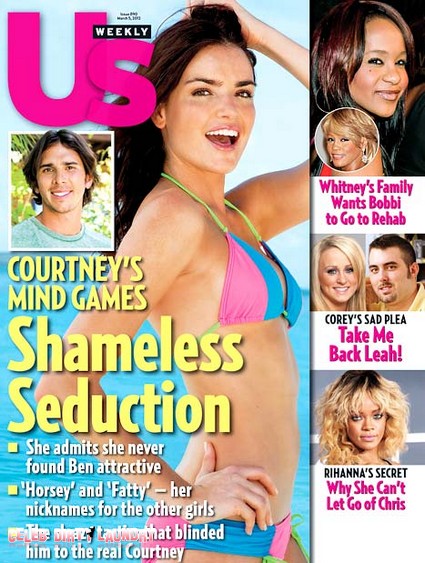 The current issue of US Weekly features the cover story ‘Courtney’s Mind Games.’  The Courtney they are speaking about is of course the evil, evil Courtney Robertson from this season’s The Bachelor.  The magazine claims that Courtney has admitted she never really found Ben attractive.

On this week’s Bachelor Courtney ranted to the camera about how bad she feels for treating the other girls so poorly.  Yet she has nicknames for the girls like ‘Horsey’ and ‘Fatty.’  It’s obvious she just realized that now because she is so close to the finish line she was trying to cover her butt for her bitchiness.   The magazine also claims they have all the dirt on how her sleazy antics blinded Bachelor Ben Flajnik to the real Courtney.   Have you been watching the Bachelor this season?  What do you think of Courtney?  Is she as evil as she seems?  Sound out in the comments below!

Also included in this week’s issue Whitney Houston’s family is trying to get Bobbi Kristina to go to rehab STAT.  Cissy Houston and cousin Dionne Warwick are gravely concerned for Bobbi.

US Weekly has more: Multiple sources telling the new Us Weeklythat the aspiring singer — who watched both of her parents struggle with substance abuse — has turned to drugs, her loved ones are urging her to go to rehab.  “Whitney’s passing is sending Bobbi off the deep end,” one insider says, adding that her family is “shocked” by the scope of her issues. “Bobbi’s problems are out of control,” the insider notes.

For more on Bobbi’s struggle with her addictions and her fights with her mother Whitney Houston, pick up the current issue of Us Weekly on stands Friday!