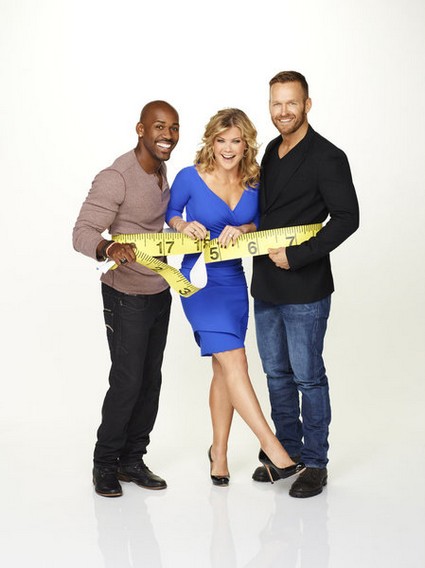 The Biggest Loser is back tonight with its 7th episode of the 13th season and we will be covering the show LIVE with all the details of the challenges, drama and elimination.  I know I say this week after week but I am hoping Conda goes tonight.  She was really repulsive last week again.  Last week Adrian was sent home and his exit off the show was one of the best I have ever seen. He did not take it sitting down. He didn’t wish his former teammates luck or even say goodbye. He resented the fact that he wasn’t given a chance in the game and he didn’t hide it.   If you missed the show you can read our official recap here!

On tonight’s show Alison Sweeney surprises the contestants with the news that one player from each team will be going home with their trainer – and that player’s weight will be the only one that counts at this week’s weigh-in. It’s also Valentine’s Day at the Biggest Loser ranch, and that means letters from loved ones go to the team who digs their way under an obstacle course of logs first with a 200 lb. dummy along for the ride, representing the contestant who has gone home.

The red and black teams do their best to burn calories while their trainers are away, and one contestant gets help from “Biggest Loser” nutritionist Rachel Beller in preparing a special meal for their loved one. Then the trainers and the two players they went home with return for a tense weigh-in before another contestant is sent home.

The Biggest Loser airs at 8PM and we will be live blogging it with all the up-to-the-minute details, weigh-ins and elimination. So make sure to come back to this spot and spend the evening with us!

RECAP: Daphne’s heart is pounding so fast, she thinks her brother was ousted and he was, she tells the group he went home only because people don’t like him. The red team got wanted they wanted, but they better watch out for Daphne, she is out for revenge.

It’s Valentines week and the teams still have to lose weight. Dolvett and Bob get to pick one person each who they will go home with them and that person’s weight will be the ones that will count at the weigh in. Dolvett picked Conda and Bob picks Daphne. Allison announces that the team that wins will get a one pound advantage for the teams at home player.

Chris feels betrayed by Bob, she told him last week because she needed him and he didn’t pick her. Megan and Jeremy don’t care and think she should get over it.

Conda arrives home and announces that she has Dolvett with her. He sits down with her mother and sister because he wants to get to know Conda, he wants to know if there is another side to her other than her attitude. They tell her that it is because of her horrible relationship with her father and Dolvett is finally beginning to understand why she is the way she is. Are you buying this? No, me neither.

Meanwhile, Daphne is home and very happy, she announces that Bob is with her and he gives her brother, Adrian, a big hug. Bob’s game plan is to work hard and beat Conda.

The black team is trying to put together a game plan for a successful workout without Bob and all the team mates think it sucks without him. The red team is already on the treadmill warming up. They continue with their regiment and have an advantage because they didn’t have Dolvett last week and they survived,

The red team’s energy is really lowered and they are not doing that well.

This is the week of Conda vs. Daphne and Bob is going to show everyone what Daphne is made of. Bob picked her because she was so angry that her brother got voted out and he wants to make it her personal vendetta. Daphne wants to prove a point to everyone on the ranch that she can go all the way.

Dolvett is working the hell out of Conda, she’s tired and exhausted, but she keeps on going.

Daphne goes to lunch with Daphne, her mother and three children. She confides into Bob that before she went on the ranch she went to the emergency department over 100 times for a heart condition. Bob tells her that they are going to get her into control and she is not going to be a burden to her children.

Dolvett gives Conda an envelope, all the team members wrote her a little letter each to give her inspiration. Conda is genuinely touched by everyone’s words and Dolvett has a surprise, a reservation at a restaurant that night for her and her friends, he is going to babysit her daughter. Conda is out with her friends and Dolvett does an amazing job with his babysitting duties, but would prefer not to ever do that again.

The red and black team have to compete in a challenge, the winning team gets a one pound advantage. The red team won, not only do they get a one pound advantage for Conda, they also get Valentine letters. Kim, a single mom, gets letters from her three children. Roy got a letter from his daughter, thanking him for being a good dad. Everyone is reduced to tears, but the letters recharge their batteries.

Conda breaks down to Dolvett, she tells him that she is ashamed of her life and tries to hide it from people. Dolvett tells her that he understands the walls that she put up, but it’s a step and she is going to get over it. Dolvett surprises Conda by telling that she is going to have her last chance workout with the basketball team at her highschool.

Bob is also ready for a last chance workout with Daphne, she is going to climb 103 floors in what Bob hopes is less than one hour. On the 20th floor Bob starts to read letters of support from the black team. After 42 minutes they are on the 70 the floor and Daphne is feeling the pain, but still going. She did it, in 58 minutes!

Daphne has won for her team. The red team is facing elimination, the person with the highest percentage of weight loss, Kim, is exempt from being voted out.

Roy is not the biggest loser and he was sent home.

Even Alison was shocked with this elimination, these idiots voted out one of the people that lost the most weight, dumb! The worst part of all this, we all have to suffer another week with Conda, ugh!