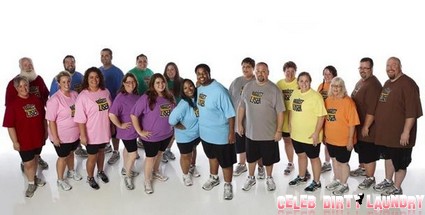 The Biggest Loser kicks off it’s 13 Season tonight at 8PM on NBC.  Stay tuned as Celeb Dirty Laundry covers the show with all the up-to-the-minute results, weigh-ins and eliminations.  For the 13th cycle, 10 teams of two arrive – including mother/daughter, father/son, brother/sister and husband/wife, all eager to change their lives together.  But they’re shocked to discover that they will not only be split up – they will also be competing against the person they came with.

Twenty contestants will start out the season, but only 18 will make it into the ranch and stay in the running to win the season’s $250,000 grand prize.  The new round has a “No Excuses” theme, and the trainers address the reasons the contestants are overweight.  Bob Harper and Dolvett Quince are the trainers, and Alison Sweeney returns as the host.

Each season the finale of The Biggest Loser ends with a marathon that the contestants run and this season host Alison will run in the Marathon and put herself through a self-inflicted endurance test of 26.2 grueling miles.

She tells them the team that comes in last in the competition won’t make it into the gates.  The challenge is in 3 Phases – Phase 1– there is a start line and they have to run a 40 yard dash, the first 4 who cross the finish line get a spot on the biggest loser.  Winners 1) Blue team 2) orange team 3) brown team 4) yellow team get a spot on the ranch.

Phase 2 – Remaining six teams they have to assemble a puzzle one puzzle piece at a time and the first four teams who assemble it move ahead.  The puzzle is not easy and the teams are having a problem.  Winners 1) Red Team  2) Purple Team  3) Green Team get a spot on the ranch.

Phase 3  and final heat with two teams left, pink team (two strangers) and aqua team (brother and sister).  There are two platforms and they have to stand on them and the last team standing wins.   All of their weight are on the balls of their feet so it is a difficult challenge.  The pink team wins and are on campus.

The aqua team (brother and sister) say goodbye to everyone.  The contestants have completed the first challenge.  Alison tells the eliminated contestants that in one month from today  they could make it back to the farm.   If they lose 50 lbs in the one month they could get a place on the farm.   The aqua team feels like they have been given a second chance and they are certain they will be back in the game and it is not over.

Roy (Who looks like Santa Claus) passes out and ends up on the floor because he has pushed himself so hard.  Ben one of the contestants started to blank out he ended up on the floor with his heart racing and he could not remember who Bob was.  He said the first workout was his ‘low point’ but he was only going up from it.

Alison comes in and asks the trainers to come over she has something she wants to say to the contestants.   She tells them that they spoke about excuses yesterday and they came as couple.  She told them sometime couples lean on each other and that is why this season it is a season of no partners.  The contestants are not happy and are bitching non stop.  This season to stay in the game they will have to depend on themselves.

The former partners have to decided which one gets Bob and which gets Dolvett.   The partners are trying to decided who will have which coach.

The teams are set to black team – Bob and red team – Dolvett.

Last chance workout – the  contestants are finding it weird not working with their partners.  Some of them have begun to accept that they have to work for themselves to stay on the ranch.  The trainers put the contestants through the ringer and too the test.  Bob’s team seems to be killing it while Dolvett’s team is taking it a lot easier.   Dolvett says he has ‘the bad news bears.’   Dolvett is started to get upset because he thinks Bob may beat him in the weigh in.  He decides to have a pep talk with the red team.  He tells them they need to have a sense of urgency.

The red team has won the first weight in and Dolvett is in celebration mode.  Someone from the back team is going home tonight. The person with the highest percentage of weight loss is Cassandra so she is immune from elimination.  Megan has the lowest percentage of weight loss but she makes a case to the other members of the black team to keep her.

Ben tells the other contestants to send him home.  He misses his wife and children and he tells them he wants to go home.   Most of the contestants are not happy with his request because he had the highest weight loss.  The contestants have a tough decision.

Ben is voted out the black team honors his request.  Megan knows that he saved her.  Ben knows going back to the real world will be difficult but he can do it.   Ben has lost 50 lbs since he left the ranch.  He felt leaving the ranch was a good decision for him since his wife is pregnant.  His whole family is participating in his weight loss.