The Bizarre World Of Suri Cruise and Shiloh Jolie-Pitt Revealed 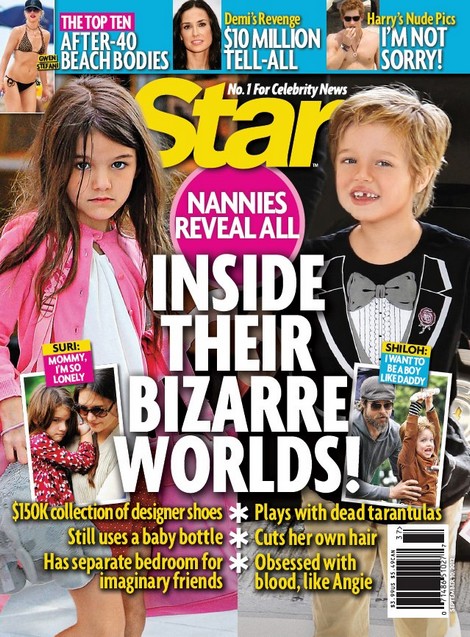 The current issue of Star Magazine features the cover story ‘Nannies Reveal All – Inside Their Bizarre Worlds!’  The week’s magazine promises to deliver all the info on Suri Cruise and Shiloh Jolie-Pitt and the weird weird lives they live.  Shiloh and Suri’s nannies have revealed all the details and we are being treated to the info.

According to Star since Katie Holmes and Tom Cruise split up Suri has been very lonely missing her daddy.  They go on to claim that Suri has a $150,000 designer shoe collection but considering that when she is 18 she will inherit $260 million that does not sound like she is spending too much.  Maybe she likes shoes….  There is no denying the six-year-old definitely is odd, she prefers to be carried around by her mother and father and she still uses a baby bottle.  Suri also has separate bedrooms for her imaginary friends, hmmm, nice, maybe I can become one of her real friends and get my own bedroom and allowance of course ;-)

The next child they have in their cross-hairs is Shiloh the daughter of Brad Pitt and Angelina Jolie.  The magazine claims Shiloh wants to be a boy like her father… hmm they need to get this story straight – because they use to claim she wanted to be a boy like her brothers.  The magazine lists Shiloh’s bizarre behavior as: playing with dead tarantulas, cutting her own hair and she is obsessed with blood like Angie.

So there you have the story folks, what do you think, are Suri and Shiloh’s lives odd or are they just doing the best they can in a crazy celebrity world?  Hit the comments and let us know your thoughts.