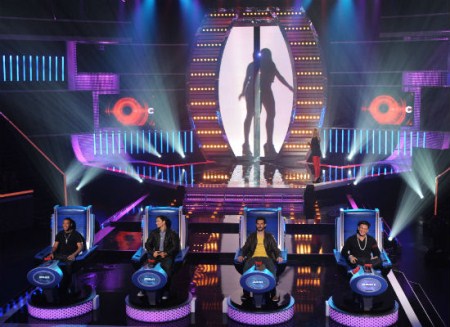 Tonight on NBC is an all new episode of “The Choice.” On tonight’s show a new group of celebrities will try to find love. If you missed last week premiere episode of the new dating show, we have a full and detailed recap here for you.

On last week’s episode hosted by “So You Think You Can Dance”‘s Cat Deeley – the bachelor’s were; Parker Young, Michael Caterwood, Joe Jonas and Seth Wescott.

Each guy got to choose three ladies, only on what they say. Each women has 30 seconds to convince them to choose her. The men first choose three, then narrowed it down to two. In the final round, Seth’s girls were first and he asked them, “what is something you should have won a gold medal for?” Morgan said for her kindness and Blair says the well round gold medal because she does everything. Seth has to choose, he picks Blair the snowboarder.

Joe was the last one to choose, here is his final question, “what’s the most important thing you made a commitment to and why”. Kimberly said the commitment she made to her brother and sister to raise them with her single mother. Latika’s commitment is to God and her virginity. Joe has to choose, he doesn’t pick the virgin, he picks Kimberly.

You can see how exciting the show is and tonight it get’s even better when the competitors include, Jerzy boy Mike “The Situation” Sorrentino, former American Idol Taylor Hicks,  former football player Warren Sapp and NY city chef Rocco DiSpirito.

Stay tuned for our live coverage of the show tonight at 9 PM EST! Meanwhile, while you wait hit the comments and let us know what you think of the first season of “The Choice” so far!

Hope is from Vegas, she’s a model and former teen Maryland. Taylor says he’ll be in Vegas this summer, good for a second date. Warren said that he is the real deal. Hope picks Taylor.

Shakyra is part Jamaican and Caribbean, she loves sports and wants to bake in her stilettos. Warren is the only guy to turn around and gets Shakyra for himself.

Liz is the total package, she claims to be beautiful with a tight body. She is a cheerleader and the top in her law class. All the guys turned around, it’s Liz’s choice. Rocco says she should just pick all of them, but she picks Mike.

Jessica is a former pageant girl, she loves having a good time; sky diving and shooting guns. She has six tattoos and if they turn the chairs around, she will show them where they are. All four guys turn around and Warren promises to make her hummingbird tattoo sing, but she picks Mike because he turned around first.

Erika is from Chicago, she is a bartender and claims to be cute and curvaceous. Warren tells her to pick him for all his chocolate and she does.

Laura is really nervous, she is shy, she’s Italian and loves to eat. Mike and Rocco turned around. Laura picks Mike.

Mike already has three girls in his dating pool.

Lexie lives in NY, she is obsessed with football, loves comedy and to decorate cakes. All of the men have turned around, even Mike who is no longer aloud to play. Warren loves that she is in to football. Lexie picks Rocco for his meatballs.

Veronica claims to be a latin bombshell, she went to an all girls Catholic school and loves football and teddy bears. All of the men, including Mike again, turn around. Veronica gets her pick, she claims Rocco.

Rocco’s dating pool is full as well, will he behave better than Mike?

Sonya is next, she loves to line dance and she is a reporter, a runner and it’s her birthday soon. Only Taylor turned around, so he gets to have her.

Angela has an exotic look, that’s it, both guys turn around. Angela is a big time sports girl, she picks Warren.

Taylor is last, so he will get two women to choose from and each women will get 15 seconds to win him over. Ruby says she is a southern bell and Taylor breaks every rule by jumping out of his chair, so he gets to keep Ruby. Cassandra gets another chance to go in next week’s dating pool.

Next is the speed choice round, here are the guys and their girls.

After a 15 second time limit with each lady, trading questions, the men get to get rid of one lady.

This is the final choice round, the guys have given questions for the remaining ladies.

Taylor’s question, “his childhood dream was winning American Idol, what is yours?”. Hope said that her dream now is that she would like to bring back her deceased father. Sonya wants to continue to learn, grow and explore the world.

Taylor has to choose, he picks Sonya (no brainer there)

Mike’s questions, “what could you be famous for and why”. Jessica says she could be famous for being an Asian persuasion. Laura says that she could change Mike’s whole attitude that he doesn’t need a stripper girl, he can have a good girl.

Mike has to choose, he picks the one that’s long term, Laura.

Warren’s question, “what hall of fame should you be into?”. Ericka thinks she should be in the opinion hall of fame, because she has lot’s of them. Shakyra says the glamathon hall of fame, she lives each day like it’s her last, she goes out of her way for other way.

Warren has to choose, he picks Shakyra.

Rocco’s question, “If you could cook what meal for him, what would it be and why”. Christina said she would cook a shrimp kabob because she is from the south. Lexie said she would make her granfather’s favourite pizza, it’s a family tradition.

Rocco has to choose, he picks Lexie.