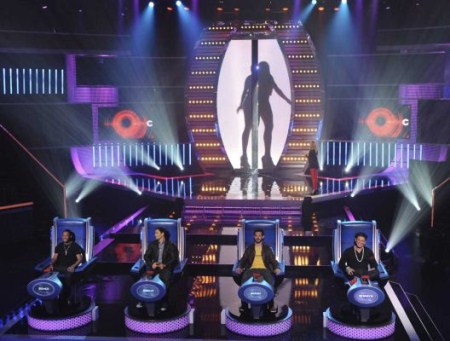 Tonight Fox has another new dating show for us reality tv junkies, this one is hosted by So You Think You Can Dance’s Cat Deeley and is called “The Choice”. This show is a complete knock-off of “The Voice” and Fox is clearly mocking NBC. They are copying the blind auditions and the celebrities who sit in their spinning swivel chairs. Although, unlike The Voice, there will be no cash prize and the C-list celebrities are only looking for a date; no fantasy suite or Oasis for these hopeful women. Stay tuned as we live blog the premiere episode with all the up-to-the-minute details and action.

The Four celebs sit in chairs with their backs turned to a woman who tries to grab their interest. If the celeb likes what they hear, they turn around. There are three rounds and the contestants are narrowed down until each celeb has chosen a date. Cameras will follow the couples on their dates so we can see all how it all goes down.

We will be live blogging tonight’s episode with all the excitement, so don’t forget to come back to this spot at 9:00 PM EST to spend the evening with us. Make sure tor refresh often to get the most current results! While you wait for the recap, check out a sneak peek of tonight’s episode below.

RECAP: Cat Deeley hosts the dating show that helps the world’s most-eligible celebrities find love. Each week four bachelors or bachelorettes first meet potential mates in a blind round, in which contestants share information about themselves. A celebrity who likes what he/she is hearing gets to meet the suitor face to face. When more than one celebrity vies for a suitor’s affections, the contestant decides whom to pursue. In the following rounds, each celebrity narrows down the suitors before choosing the person to take on an ultimate dream date.

Rachel is out first and wins the attention of Jeremy and Jason by talking about her 96 year old grandma. She talks about her She chooses Jeremy.

Elise is the second lady out and all four men turn around. She chooses Paulie D.

Lisa is a model and going to school to be an English teacher. Only Romeo turned around.

Lisa is a virginal choreographer and authentic California girl. She chooses Jeremy.

Amber is a fashion assistant and a pageant girl. She dares the guys to turn around after talking about farm life and all four guys turn their chairs. She chooses Jeremy

Nia gets the attention of all the guys, especially when she says she cooks dinner and leaves her men satisfied. She picks Jason.

Ashley seems a little bit bonkers. She begs to be picked but fails miserably.

Elizabeth is a dancer and perusing a physical therapy degree. She’s a smart girl which seems to appeal to these guys. She picks Jeremy.

Annapurna is in a rock band and a folk band. She gets to choose from Paulie D and Jason. She picks Jason who calls himself a film geek book nerd.

Donna is from Romania and ends up on Paulie D’s team.

Vanessa is a volleyball coach that gets a major reaction. Romeo and Paulie D turn around but Romeo gets her on his team.

Angelise is a comedian with a grating voice. She kind of resembles Jessica Rabbit and chooses Romeo’s team.

The second round of competition is a speed dating round which gets a little crazy. The guys each have three girls on their team and they fire off questions at each other. At the end a girl on each team is eliminated.

The third round is another elimination round. The girls answer a question and their answer determines whether or not they get a date with the guy whose team they’re on.

Jason picks Nia for a date, Paulie D scores face time with Elyse. Romeo is going out with Lisa and Jeremy will see Amber.

Tune in next time to see how these impromptu celeb dates pan out.