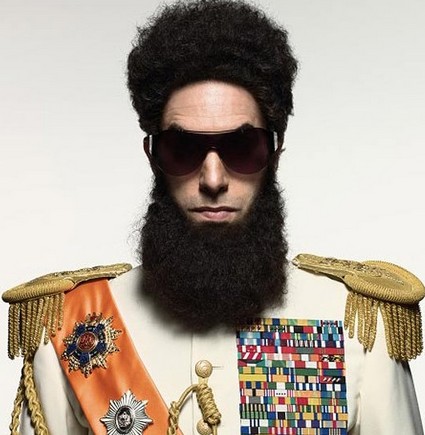 The upcoming film starring Sacha Baron Cohen, The Dictator, has gotten the world’s most expensive advertising slot during the Super Bowl this Sunday.  The Dictator is loosely inspired by a novel written by Saddam Hussein.   Just by watching the commercial you can tell that this film is inspired by Libyan’s former leader Muammar Gaddafi.

My favorite part in the commercial is when he’s saying to America that he’s bought NBC and knows the final score of the game and where he’s competing in a 100m race and decides to take some shots at his opponents with a pistol to win the race.  I also like when he gets the finish line pulled towards him.

To be honest I like Sacha Baron Cohen’s characters a lot and the movies like Borat and especially Ali G. I wasn’t a big fan of Bruno because, well it was literally too gay for me to enjoy.

This movie looks pretty funny in my opinion, I’d say give it a watch in theatres, if you’re not sure whether you want to spend money on going to the theatre then just wait till it comes out on DVD.