The Ecstasy War: Madonna Fires Back At Deadmau5 After He Called Her Out On ‘Blatant Drug Reference’ (Photo) 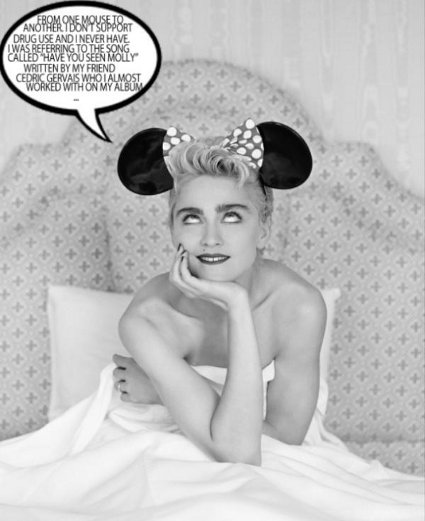 We recently reported that Deadmau5, one of the world’s most popular and sought after DJs, criticized Madonna for making what seemed to be a very blatant drug reference at the Ultra Music Festival this past weekend. During Madonna’s live Twitter Q&A (to promote her new album), the persistent DJ decided to drop by for the session and confront the singer one more time. Not only was Deadmau5 able to capture her attention, but the two had a full on dialogue!

While the conversation definitely didn’t go on forever, the two definitely exchanged enough tweets to sufficiently clear the air — or so we think. Madonna’s final comment, in the form of a picture (above), seems plausible . . . but we’re still not entirely convinced that she wasn’t trying to make a drug reference. I’m sure she was aware of the title’s double meaning and how it could possibly be perceived by her audience. What do you all think?

Words in the speech bubble from the above photo:

“From one mouse to another, I don’t support drug use and never have. I was referring to the song called ‘Have You Seen Molly’ written by my friend Cedric Gervais who I almost worked with on my album.”

However, all has been said and done and it’s probably time to sweep this little “misunderstanding” under that magical rug that does such a fantastic job of burying Celeb World problems/mistakes/etc.

Deadmau5 tweeted the singer the following message to get the rumble going:

@MadonnaMDNAday You’re a role model to 100’s of millions. You have a powerful voice,EDM could use your positive influence, not “molly” talk.

The message did it’s job in capturing Madge’s attention, and she quickly replied with the picture, which we’ve provided for you above. The conversation ultimately ended in a truce of sorts (all be it a slightly awkward one), but the two artists seem to be on relatively good terms now. Phew! We were worried their for a second. 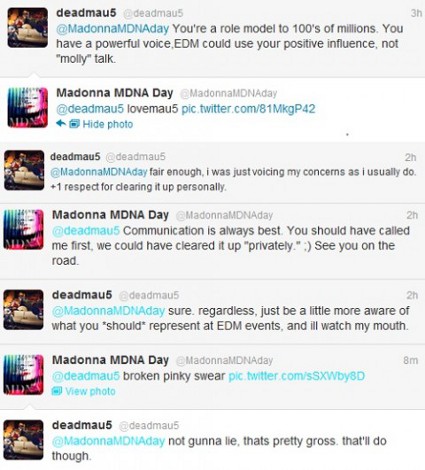