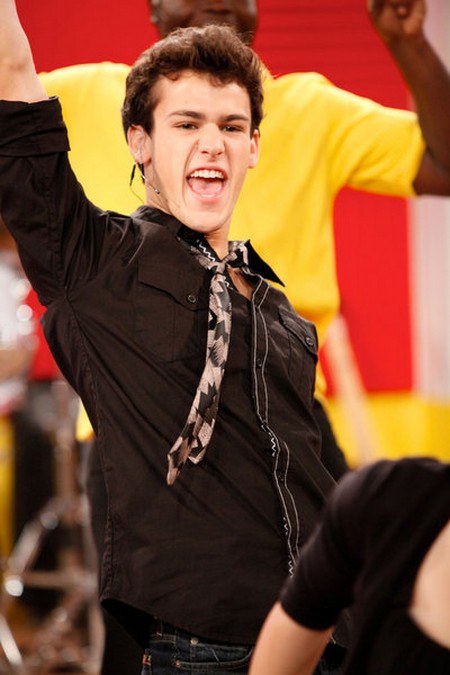 Tonight on Oxygen is an all new episode of The Glee Project. On tonight’s show the contenders must prove they can bust a move for “Dance-ability” week.  The show kicked off last week and it was awesome.

“The Glee Project” is a groundbreaking, 10-episode competition series from Ryan Murphy, the co-creator and Emmy winning executive producer of “Glee.” The show finds and trains a group of extraordinarily talented performers (Gleeks), who compete against one another to win a guest starring role on “Glee.”

The series uncovers a unique group of artists from both professional and amateur backgrounds, proving every underdog has a fighting chance at stardom.

On tonight’s show the contenders must prove they can bust a move for “Dance-ability” week.  A passionate kiss spurs jealousy as the group performs LMFAO’s “Party Rock Anthem.”

Samuel Larsen, last year’s winner of The Glee Project heads back to the show tonight as the mentor.

Stay tuned for our live coverage of the show tonight at 10PM EST! Meanwhile, while you wait hit the comments and let us know what you think of Season 2 of  “The Glee Project” so far!

RECAP: Tonight’s new episode is all about “danceability”.  The kids are all in the rec room waiting for more info on what they’ll be doing.  They’re really excited to find out that this weeks’ song is We Got the Beat by the Go-Go’s.  Taryn decided to leave the competition.  She was extremely stressed and not coping well with the pressure.  She also really missed her mom.  Best I can tell Taryn was smart and probably knew it.  These kids are committed to the song for sure.  The problem is that when you put them all together dancing in rehearsal, it is so many shades of horrible.  Lily Mae play knocking anyone on their butt is just bad.  Ali who is in a wheelchair, spinning in a circle is worse.

Charlie seems to have a crush on Aylin.  They can’t seem to keep their hands to themselves.  Meanwhile Lily has minimal control over her voice, despite training galore.  The kids are playing spin the bottle for this week’s music video and Blake grabs Aylin for a huge kiss that makes Charlie jealous. They keep saying Dani is unique but I beg to differ.  She is a Justin Bieber look-a-like which makes her absolutely not an original.

The video itself is horrid.  The kids can’t dance at all to LMFAO’s Party Rock.  They can harmonize but their individual spots are very weak.  It’s supposed to be a house party and yes, someone did dump a bag of chips over Aylin’s head shortly after Ali did wheelies with her chair.  The judges say it was a catastrophe.

The judges aren’t picking people to stay because they were good; they were simply the best of the worst.  Lily can’t take criticism at all and that alone she be her ticket home.   Dani, Tyler and Lily have to perform tonight.  They are given individual songs to perform and two hours to practice. Lily thinks she will use her Shania Twain cover to prove she is the spokesperson for big, sexy girls everywhere. Yeah, whatever.

Dani is up first, performing the song Landslide.  She sounds very good which is weird because I never saw that about her twin, Justin Bieber.  The judges love her sound but aren’t sure that she’s a performer.  Tyler is up next with Daniel by Elton John.  He also sounds great but they think he needs to be braver in performance.  Lily is last performing, Man I Feel Like A Woman.  She definitely performed this song.  They are telling her that she doesn’t take criticism well. They don’t like a bad attitude.

The call back list includes Tyler and Lily.  Dani is sent home because she is a good vocalist but doesn’t have a personality suitable for Broadway.