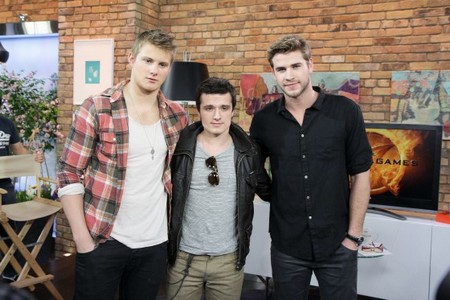 The whole cast of the highly anticipated Hunger Games film are busy jetting all over the world to promote the March 23rd release of the movie – and luckily Toronto fans got a glimpse of a few of their favorite characters this morning on The Marilyn Denis Show (my roommate included…the lucky lassie).

Alexander Ludwig (Cato), Josh Hutcherson (Peeta), and Liam Hemsworth (Gale) visited the show early this morning and were greeted by screaming fans.  Josh and Liam both told the talk show host how connected they both felt to their characters and how lucky they felt to be a part of the film.  When asked if they knew how huge the impact of the books were and whether they realized the impact the movie would have, they both agreed that it was impossible to foresee the amazing fan response that they have received.

Although both a little overwhelmed, they were really excited to be a part of the Hunger Games phenomenon.  Alexander Ludwig, who is Vancouver-born, talked about his transformation into District Two’s Cato.

More: Jennifer Lawrence Is The Reason The Hunger Games Will Be A Success

I had to put on 40 pounds for the role; I’m still trying to lose it. It sucks so much. I did fight training, sword training. I also worked with a US Navy Seal. I wanted Cato to have as much of a physical presence as a mental one.”

He’s no match for my Peeta!  March 23rd can’t come soon enough.  Oh ya, guests of the Marilyn Denis show got tickets to go see the movie tonight…I’m silently cursing my roommate through clenched teeth…sigh.