The Hunger Games Graces The Cover Of Entertainment Weekly (Photo) 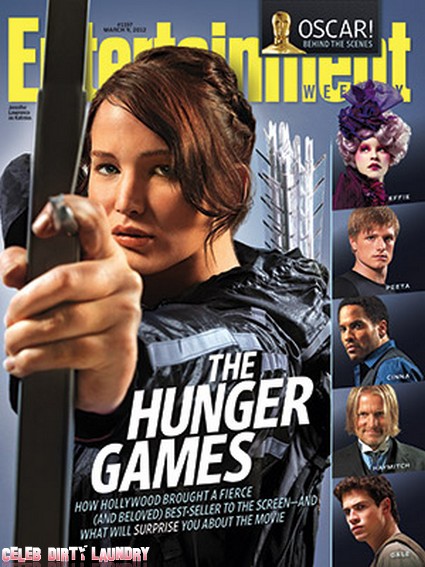 Entertainment Weekly is hitting newsstands on March 2nd, and fans can expect to see our favorite characters on the cover – specifically a large shot of Jennifer Lawrence’s Katniss holding up her bow and arrow.  In the issue the cast opens up about what it was like both in front and behind the camera.

If you can believe it, Woody Harrelson initially turned down the role of Haymitch.

“Listen, I’m nuts,” he explains. “It was just a stupid thing where I hadn’t read the books yet. I didn’t see that there was enough for me to do in the script. But then Gary called me back and said ‘You got to do this, I don’t have a second choice for the role.’ And of course flattery always gets the best of me so I read the books and really saw the depths of this guy. Holy s—, I would have been bummed to miss this.”

You can certainly say that again.

For Lenny Kravitz, who plays Cinna, it was a bit different.  Although he was oblivious to the Hunger Games phenomenon (he was after all living out of a trailer in the Bahamas while working on his album), director Gary Ross approached him after being moved by the musician’s gentle grace in Precious, and also because he had already a natural bond with Jennifer Lawrence – his daughter Zoe and Jennifer became fast friends while making X-Men: First Class.

“I love that girl,” says Kravitz. “The minute I met her she became a part of the family.”

And we love you too Lenny!!!  Deep breathes people; March 23rd is just around the corner.