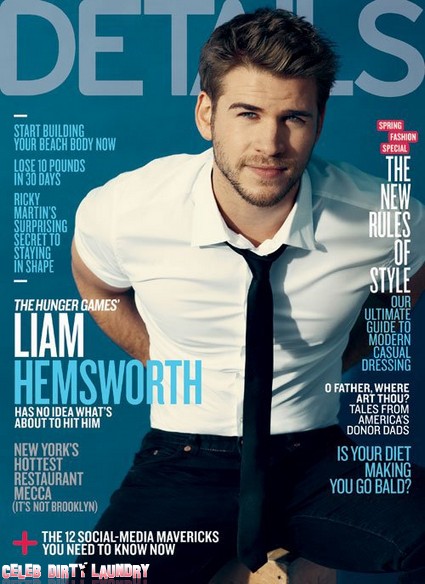 Will the next celebrity engagement be Miley Cyrus and Liam Hemsworth? The former tween star and Aussie actor have been getting hot and heavy for more than two years. Now Liam wants to make the girl formerly known as Hannah Montana, Mrs Hemsworth.

Liam’s opened up about his feelings for the wild child in the latest issue of Details – and he doesn’t hold back.He wants what older brother and fellow actor Chris Hemsworth has …which is a wife! So what did he say to the mag? Well he tried to be coy saying ‘I’m sure I’ll get married one day‘. We know what that means. He’s probably already shopping around for some serious engagement bling!

The couple met on a movie set. Isn’t that where all great romances start? For them it was the forgettable The Last Song. Liam admits it was pretty much love at first sight when they began working together ‘When you start, you want to be professional, but when you’re filming those scenes with someone and pretending to love them, you’re not human if you don’t feel something.’ They did split for a while but Liam won his former Disney Princess back and he’s not going to risk losing her again. He knows a marriage proposal will do the trick!

It looks like 2012 is going to be a big one for the former Aussie tradesman. His Hollywood career is just about to go into overdrive with his new movie The Hunger Games out next month. And now he’s planning to ask Miley for her hand in marriage.