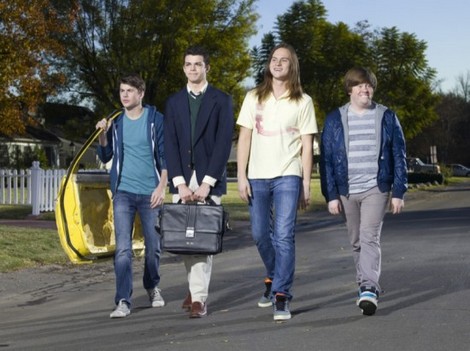 Tonight is an all new episode of MTV’s hit series The Inbetweeners.  If you have not watched the show, “inbetweeners”  are not nerds or jocks, but kids who are smack in the middle of the high school social ladder.  It takes a comedic look at a group of teenagers navigating high school and charging into adulthood the way everyone does…by taking one step forward and three steps back.

On tonight’s show called “Club Code,” the boys decide that a bowling alley is their best shot at getting served alcohol underage, so they pay a local patron to buy them beer. When that fails, they tag along with Carly and her friends at a night club.

We get to see what a night out on the town means for The Inbetweeners.  The preview video for tonight’s episode is great. Jay pipes up as they head into the club, “OMG, It does exist!” and Will’s reaction heading into the club really says it all: “This is it,” he says upon entering the party, “the first day of the rest of our lives.”

Jay goes on to tell Will that this is “One small step for mankind and one giant  step for the flippers.”  The boys split up to find women.

Tonight is going to be another fun episode that you won’t want to miss, so be sure to tune in for our live coverage of MTV’s “The Inbetweeners” tonight at 10:30PM PST! Meanwhile, while you wait for our recap hit the comments and let us know what you think of season 1 of “The Inbetweeners” so far! Check out the sneak peek video of tonight’s show below!

Get More:
The Inbetweeners, Full Episodes

The show starts with the guys scheming to buy beer. Jay figures that the unsupsecting bowling alley attendants will have no idea that they’ve come to drink, not bowl. Will gets an adult to buy them each a beer, and the man ends up sitting with them. Simon considers skipping out on the guys night and going to see love interest Carli, who is babysitting for his parents. They leave the alley and realise that they must either accept their awkwardness or receed into denial.

Simon acts super stalker-ish and asks Carli why her boyfriend didn’t take her to school. The guys say they were going to go clubbing, and get invited to go with Carli and her friend (who knows the bouncer and will get them in). They decide that clubbing = cool. Simon, Will, and Jay go to pick up Neil, whose sister is home from college. After an embarassingly long “stop looking at my tits” scene on the porch, Neil gets into the car and the guys head to meet Carli at the club.

Jay leans out the car window and yells “bus-tards!!” to a group of people at the bus stop. Call me an English major, but I bet that one of those guys will end up pounding one of the guys into a bloody pulp later. Ahh, here we go. Jay just yelled at a new group of “bus-tards” just as Will’s car dies. Two large, threatening men approach and yell. One has extensive muscle definition. It’s Will’s lucky day. The thugs leave after criticising their bright yellow car.

Simon parks illegally, in a back alley, and gets bullied by a hobo, who insists on a pair of shoes in exchange for watching the car. They find Carli in line and Will acts predictably awkward while trying to hit on her friend, Sloan. Will and Simon go after Sloan and Carli, leaving Jay and Neil to act like total creepers, watching girls dance. Jay pulls out two glow sticks and starts doing a Marcia Brady-esque wrist-roll dance.

Will is disappointed to learn that there will not be any slow dances in the club, and then stumbles on Sloan flirting with a blonde guy on a couch. Jay tells Will to “out alpha-dog” the blonde guy to prove to Sloan that he is worth dating. Will interrupts their cozy couch time, trying to break the two apart so he and Sloan can dance. Sloan insists that she wants nothing to do with him, and Will runs back into the crowd. Jay dances with a bottle blonde in a low cut top. He has some sort of flashing light in his mouth, changing his teeth from blue to red to green.

Security chase Neil after two guys report that he was “playing with himself” in the bathroom. Will tells Carli that Simon smells like urine because he is wearing a bum’s shoes. Security throws the guys out of the club. They realise that getting thrown out of a club is supremely cool, but their buzz is killed when they find that their car has been ticketed and will be towed for being parked illegally. The bum tries to trade shoes back, and jumps on the car while the guys scream inside. Carli and Sloan walk past the alley just in time to see the guys getting harassed by the bum.