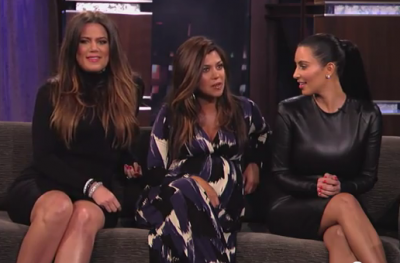 The Kardashian sisters, Kourtney, Kim, and Khloe, all sat down last night with talk show host Jimmy Kimmel where they dished out all the goods from everything to Kanye West, Kourtney’s pregnancy, and Khloe’s peacock.  Yes, I said peacock.

While the girls were initially there to promote they’re nail polish line – colors in which Jimmy had painted on his fingers, naturally – the questions came flying from Jimmy, and the girls didn’t hold back.

When Kim was asked about her current relationship with superstar Kanye – the couple known now as ‘Kimye’ – Kim said she should “thank” Kimmel, as her and her man now know each other best due to a project Kanye and Kimmel had collaborated on with her.  Well thanks for that Jimmy.

As for Kourtney, she admitted that the reason her and her baby-daddy Scott Disick (who for the record I am liking more and more these days, who would have thought) haven’t tied the knot yet was because of the deep commitment issues that she faces. Of course Jimmy piped in by saying, “Why don’t you try marriage for a little while like Kim did and see how it goes?”

It caused quite some laughter as you can imagine.  As for Khloe and her pet peacock bird?  Well, it’s just that.  She ‘saved’ a wild peacock from going to the animal control and now her NBA hubby Lamar Odom is terrified of it.  He’s over 6 ft. tall I might add.

All in all, the sisters no doubt draw lots of laughs.  Despite what people say, it’s clear they are strong businesswomen and work hard for their ever-growing empire.