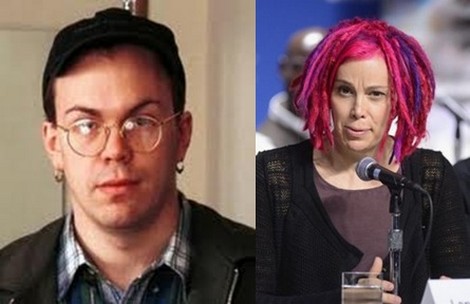 In one of the most surprising twists since The Matrix’s philosophical knee-jerk reaction, the director of said film, Larry Wachowski, has publically confirmed a gender switch for the first time. No, this is not an ambiguous and pretentious article about an upcoming Matrix film – this is real life.

Lana Wachowski, formerly known as Larry Wachowski, has publically come out as a male-to-female transgendered person. She “embraced” her gender switch in a promotional video for her new movie, “Cloud Atlas” – which has been touted as the most expensive independent film of all time, with a budget of over $100 million self-financed dollars. Lana’s pink dreadlocks were visible in the promotional ad for the film.

During a press conference at the Toronto International Film Festival (TIFF), Lana elaborated on her reasons for the public announcement. She said, “I did feel some responsibility to the GLBT (gay, lesbian, bisexual and transgender) people, and some people had been asking me to be more public.” In a recent interview with the New Yorker, Lana also spoke out about her loss of gender identity during her high school years and how she felt unclear on whether she belonged with boys or girls. This same interview also exclusively revealed that Lana had been living as a female ever since 2009, when Larry (her pre-switch gender) split from his wife.

Her upcoming film, the much anticipated Cloud Atlas, has elements of gender switching. Lana felt like this was an extension of her experiences as a transgendered person. The film’s plot synopsis has been described as “an epic story of humankind in which the actions and consequences of our lives impact one another throughout the past, present and future as one soul is shaped from a murderer into a savior and a single act of kindness ripples out for centuries to inspire a revolution.”

Lana also spoke out about the film’s thematic content and said, “I knew that one day I would be more public and we had to negotiate when that would be. And this movie, which is about transcending our of “other” in so many ways… it seemed quite natural to do it now.”

Lana, we salute you for your courage and resilience. May your message be a testament to the millions of “other” voices who are not able to follow this same journey. Let us know in the comments below what you think of Lana Wachowski’s journey and please, be as thoughtful as possible in your commentary.