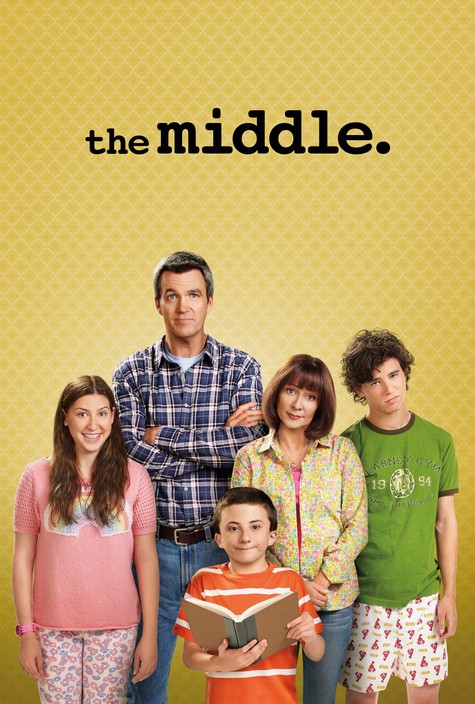 ABC’s series THE MIDDLE which stars Patricia Heaton and Neil Flynn airs tonight with a new Halloween episode entitled, “Halloween III: The Driving.”  Celeb Dirty Laundry had the opportunity to see an advance screening of tonight’s episode and a chance to participate in a Q & A session with Patricia Heaton who plays Frankie Hecks, Mother in The Middle.

The Middle is a family comedy that centers around the Hecks family comprised of Frankie and her husband Mike with their three children, Axl (A Guns N’ Roses conception), Sue, and Brick. The family were born and raised in Orson, Indiana, where they currently reside. The Hecks are meant to be representative of the middle of Middle America and they face issues a typical family would face in today’s world.

Of course not all members of the Hecks clan are entirely typical!  Daughter Sue and younger son Brick are both slightly off-kilter psychologically – Brick is brilliant but a loner, a bit of a social misfit – whereas Sue, the middle child is at least mildly neurotic suffering from a marked insecurity and even some OCD.  While these issues are not to be made light of, and they are not on The Middle, the show successfully manages to integrate them into the plot presenting ample opportunity for warm humor in the family dynamic.

A family growing up will always present challenging issues for the parents and of course the mom and dad will have strains and growing pains as well.  What viewers love about The Middle is that what happens on the show is so relatable to their own lives. Watching how Frankie and Mike deal with 3 demanding kids while they juggle their various real-life responsibilities provides fantastic entertainment for the audience.  It is always soothing to see how other people deal with problems and situations that we face ourselves.

The Hecks are a very realistic portrayal of family life in Middle America to which viewers relate closely as we discussed above. According to Patricia/Frankie she encounters fans who relate to the show in earnest: “I had a mom stop me and say “I get it. You guys do it so well. That’s exactly I’m on board with everything you guys do.” So I do think that it touches a lot of people. We read a lot of magazines. We see a lot of talk shows about what our homes should look like, what we should look like, you know, fitting in the parties and doing the healthy snacks, and using recycled lunch boxes, and bringing your just, you know, your reusable bags to the grocery store.”

On tonight’s show “Halloween III: The Driving” the family favorite spooky holiday is approaching and Sue has decided to get her learner’s permit as she aims towards her driver’s license and Frankie and Mike are terrified at the prospect of having to teach her – remember Sue is not an easy-going child.  Patricia had this to say about Sue learning to drive, “The Halloween episode I don’t want to give it away. Well, let’s put this where (Sue) is learning to drive and something horrible happens. So the Halloween episode is the beginning of a long arc for this season – a story arc that all starts with (Sue) trying to learn how to drive, and it doesn’t end up well — so just to tease your audience. They really need to tune in.”

Meanwhile Axl has just turned 18 and is all thrilled and self-righteous about the prospect of voting for the first time.  For Axl this coming-of-age experience helps solidify his impression of himself as an adult and he is puzzled at what he sees as his parents’ rather cavalier attitude to universal suffrage.  But Axl is in for a surprise…

The Brick’s theme revolves around the most important aspect of Halloween to any child – namely CANDY!  We can’t say more but rest assured that Frankie’s plans lead to some unexpected consequences!

And in this the show is brilliantly written – you’ll be shocked that Patricia says there is no ad-libbing.  All the whip-crack humor will keep you laughing non-stop.  According to Patricia the jokes are prepared even though they seem spontaneous:“No, they are – we have what we call a script Nazi who – and she’s lovely and she has the worse job in the world, which is she will come in and say, “the word is gonna, not going to.”   Patricia talked about whether she would like more freedom, “When the writing’s good, yes, then 75% of your work is done. As long as you say it exactly as they wrote it, you’re going to get – you’ve got a 75% chance of getting a laugh. So yes, no in some ways it’s much easier because – and by the way, Everybody Loves Raymond was exactly the same way. There was no ad libbing on the show. And you know comedy writing is very specific. It’s much easier to ad lib in a drama because there’s no rhythm. You don’t need your sentence to have a rhythm in order to get a laugh. But in comedy you could have a joke but if you put the emphasis on the wrong word you wouldn’t get the laugh, so you have to – it has to be said a certain way. That’s why – and it has to have certain words in it to make it funny. So there’s sort of a science to it. So you have to follow the formula in most cases on this show because it’s very musical. So you have to hit the notes that were written in order for the music to sound right. So a lot of people assume comedy is ad lib; it’s mostly the opposite. Comedy is almost completely scripted, and in drama you could get away with not saying exactly how it’s written because you’ll still get the information across and you’re not trying to get a laugh. But it’s easier in some ways because that’s the writer’s -is to, you know, craft it in a way that makes it funny and then it’s the actor’s job to just give voice to it and bring it alive.”

Here we got to ask an important question of Patricia – if her real-life experience as a mother influences her role as Frankie and if so, then how?  Patricia Heaton: Yes, I think, you know, I am like – excuse me for yelling – the two women who created the show are also moms, our kids about the same age. So we all – they bring their experiences and as you know, we’re all going through the same stuff with our kids whether it’s you’ve got the one kid who never does his homework, you got the other quirky kid like (Atacus) who’s got issues and maybe not sociable enough, or maybe you have a daughter who is sociable and not academic enough, whatever. I mean I think we all have those things, and so I am amazed how the show absolutely reflects my life. So and, you know, I’m here in Hollywood so my life’s a little bit different from a lot of people. But still if it’s reflecting what I’m going through — and it really does, it’s certainly reflecting everybody else’s life. So I think that’s one of the successes of the show. The other great thing that it does though is it takes – which I think we all to see our lives reflected in a really humorous and hopeful way, which our show does very successfully I think.

Take our advice – we review tons of TV programs and interview loads of stars here at Celeb Dirty Laundry but The Middle and Patricia Heaton stand out for their quality.  Whether you have a family yourself or not you’ll be entertained and get a good laugh when you tune it.

Tune in tonight  Wednesday October 24th, 2012 at 8PM ET on ABC and watch the Halloween-themed episode of The Middle entitled, “Halloween III: The Driving.”  Join us for a Live Twitter “The Middle” Viewing Party tonight.

Disclosure: I participated in this sponsored post campaign for One2One Network.  All opinions stated are my own.