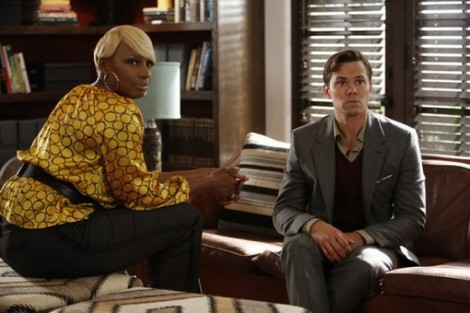 Tonight on NBC their new controversial drama The New Normal airs.  Before the show even premiered a watchdog group blasted it for exposing families to, “the decay of morals and values, and the sanctity of marriage.”  Nevertheless, the show promises not to be too preachy or political and I am looking forward to seeing it.

The New Normal is a drama filled comedy following the experiences of a gay couple – Bryan and David as they attempt to start a family via down-on-her-luck surrogate Goldie.  The rest of the non traditional family includes Bryan’s smart-mouthed assistant Rocky, Goldie’s 8-year-old daughter Shania and her homophobic, racist grandmother Jane whom is called, “the world’s worst in-law.”  The mix of personalities might not match everyone’s family portrait but the show is about everyone’s house.

On tonight’s show Shania  is working to adapt to her new surroundings and, much to the delight of Bryan, begins impersonating Little Edie from ‘Grey Gardens.’ Later, David and Bryan reminisce about the first time they met and decide to have a night on the town like they did when they were younger.

Elsewhere, Jane  finds something disturbing in the boys’ room and enlists Goldie’s (Georgia King) ex-husband Clay to try and woo her granddaughter back to Ohio. Elsewhere, Rocky  mistakenly suspects Shania of misbehaving.

Tonight’s season premiere looks like it is going to be great and you won’t want to miss it, so be sure to tune in for our live coverage of NBC’s The New Normal at 9:30 PM EST! While you wait for our recap hit the comments and let us know what you think about the controversy surrounding The New Normal?

Tonight’s episode: Rocky shows Bryan that his couch is ruined because Goldie’s daughter drew on it and he is upset, she tells him it’s going to be rough having a child if he can’t handle this. David is testing Goldie to see if she is pregnant. Bryan tells Goldie what Shania did and David suggests that he talk to her about it. David thinks that when he and Bryan have a child they are going to be in charge of their child, Goldie laughs and Bryan looks surprised.

Shania is running around pretending to be crazy and Jane is shocked and tells Goldie that her daughter should not be hanging around with the “fudge factory”. Jane goes on to say that when she was a child there was a president that owned a president like the one we have now. Before she leaves she tells Goldie to let her know if she is pregnant, so she can send her a card with Satan on it.

David is playing basketball and tells his friends that he and Bryan are going to have a child, his friends think he is nuts and scare him with a bunch of stories about how they have no sex anymore since they have kids.

Back at home, David and Bryan reminisce about when they first met at a bar, the day David graduated from med school.

Bryan goes to speak to Shania and practice his parental skills and she denies it, in character. Goldie and David walk in, David is dressed up looking like Madonna’s boyfriend, they are going dancing. Goldie and Shania are leaving and David asks why Shanie is dressed like a jewish grandmother.

At the bar, David wants he and Bryan to recapture their youth, they kiss but don’t seem like they are enjoying the bar as much as they did the night they met; they both admit they are getting older.

At home, Shania is still pretending in character and Goldie asks her why she is doing it when the door rings and it’s Bryan and David that have dropped by with a house warming gift, a new house. Bryan and David are giving their guest house for Goldie and Shania to live in, Shanie is so thrilled that she drops the character acting and asks her mom if they can please stay.

Shania is acting all normal in front of Bryan and he is shocked, she tells him that she started school and the kids are not accepting her in character. Shania tells him that her nana thinks she nuts and she is just acting like herself. Shania wants to know why Bryan gets her, but her mom doesn’t. Bryan tells her not to be afraid to be who she is because she is spectacular.

Bryan and Shania start discussing the couch and Shania admits it was her grandmother Jane who did it.

Goldie goes to pick up Shania and when Bryan and David want them to stay, Goldie tells them that they have to leave because she doesn’t want to get to comfortable with them, she wants to be an independent woman. David gets a phone call, it’s the results for the pregnancy test, they are officially pregnant.