The Other Woman Behind Tom Cruise And Katie Holmes Divorce 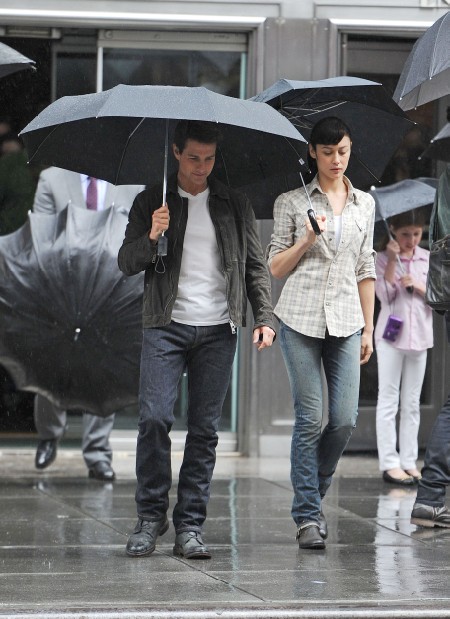 With the shocking news that Katie Holmes is after full custody of daughter Suri, it’s safe to say her divorce to Tom Cruise is going to get dirty so we did some digging around and found there could be another woman that caused the surprising split.

A few weeks ago MediaTakeOut.com featured a story that Tom’s been getting a little too close to his Oblivion co-star. Tom’s other woman is Olga Kurylenko, a Ukrainian-born actress/model and Bond girl. She starred alongside Daniel Craig in Quantum of Solace. The website said Tom’s eyes were all over the beauty even when the cameras stopped rolling on the streets of New York City.

TMZ has a picture of Tom in Iceland walking with a woman who looks exactly like Olga. The movie is shooting there now, but the picture was obviously taken during down time. Filming began in late March, which is about the last time Katie and Tom were papped together. On April 5 Katie took Suri down to Baton Rouge to visit her dad on the set and the couple were seen walking around hand in hand with Katie’s robotic smile fixed in place.

So what happened since then? Could Katie have noticed Tom’s interest in Olga? The 32-year-old is known for her steamy scenes and smoldered in Flaunt magazine’s recent Denim issue. She told the mag, “[Being from a working class family in the Ukraine] helps me to keep my feet on the ground, and there’s no danger of ever taking them off the ground. I know what real life is, and I’m not going to believe in the not real. I know what’s true and what’s not. If I have to play the game, I play the game, but I’m never confused.”

That sounds right up Tom’s alley, doesn’t it? Was Katie tired of playing the game? No one knows yet for sure, but there have been signs. All we know is Katie struck first which means she wants out. She didn’t wait for Tom’s Scientology minions to handle the situation. Lainey Gossip found out that Tom asked Katie to reconsider and wait six months. He probably didn’t want this news dropping so close to his Rock of Ages’ failure and his 50th birthday. Lainey also reported Katie’s back to using her own representation and not the same people as Tom. So she’s cutting ties fast. Something’s up. I’m not sure if it was Olga that caused the split. The pictures looks convincing, but Tom is stealth when he needs to be. It’s not in his nature to jump on couches or gaze into a woman’s eyes in the middle of Manhattan unless he’s selling something.

I’ll let you know as soon as I know more!

In the meantime, do you think it’s another woman or was Katie just tired of playing Tom Cruise’s wife?