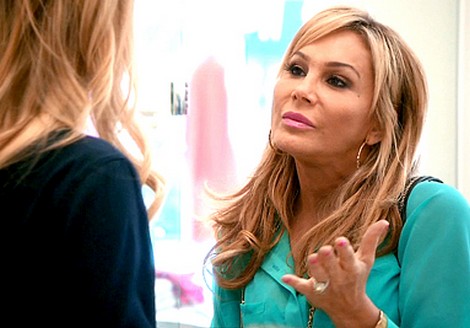 THE REAL HOUSEWIVES OF BEVERLY HILLS returns to Bravo tonight for the season premiere of its third season called “Down and Left Out in Beverly Hills.”  The ladies are back, but Adrienne and Lisa are already at odds for last season’s drama.

The brassy, bold beauties of Beverly Hills are back for a third season of wealth, luxury. . .and lots of problems. In the first episode, Lisa and Adrienne’s friendship has soured, with both expecting apologies for accusations and barbs made previously. When Lisa doesn’t invite Adrienne to the exclusive anniversary party for her restaurant, Adrienne is more than miffed. And theirs is not the only friendship that will be tested in this season of wild outbursts, vehement backbiting, and unrivaled glamour.

The Housewives of Beverly Hills know a thing or two about lavish parties, but when Adrienne doesn’t get the invite to Lisa’s exclusive anniversary party for her restaurant, its clear the ladies have some unfinished business from last season. New housewife, Brandi Glanville, stirred things up too much for the other housewives last year and is looking to squash the tension, but at a dinner outing to make amends, she ends up saying more than she wishes…

Tonight’s episode is going to be filled with the usual Housewife drama and you won’t want to miss it, so be sure to tune in for our live coverage of the show tonight at 9 PM EST! While you wait for our recap hit the comments and let us know how excited you are for the premiere of “The Real Housewives of Beverly Hills” season 3!  Also we have a sneak peek video of tonight’s show below!

At long last those housewives’ of Beverly Hills have returned!  Lisa has moved and no longer has Adrienne as her neighbor. The house is smaller and calmer and she has invited Brandi to see it first. It is very obvious that these two women have become incredibly close since the last time we saw them. Lisa’s hubby, Ken joins the tour of the house and it’s a total love fest. Lisa tells Brandi she’s having a party with everyone except for Adrienne who she is still furious with. Adrienne accused Lisa of selling stories to the tabloids and that was the end of their friendship.

Kyle is one of the more spoiled housewives and on tonight’s show she continues that trend. Her husband decided to gift her with a nice little Masaratti.

Adrienne is lunching with her (then) husband Paul when Taylor calls. She wants to have a girl shopping trip to get dresses for Lisa’s party. Adrienne thinks it’s pretty shitty for Lisa not to have invited her, not to mention a total embarrassment.

Yolanda is married to David Foster and the newest cast addition.  She has three teenaged kids, has built her own version of an empire and seems to be pretty in love with her husband. She is good friends with Lisa and can’t wait to meet the rest of the ladies at Lisa’s party.

Kim is only home from rehab for a month when this was filmed. If you remember last season Kim was usually incoherent and a sloppy mess. Now she’s just plain annoying while trying to help her daughter pick out a prom dress. Kim’s sister, Kathy Hilton is trying to help sort through the pile of dresses when Kyle shows up. Kim put Kyle through hell when she was using and their relationship is still a bit rocky now.

Kyle’s daughter Portia is turning four and she is personally calling people to invite them to her party. She gets Taylor, Brandi and Lisa on the phone but even though her Aunt Kim is sober, that doesn’t mean that she can be reached.  Speaking of Taylor, she meets up with Adrienne to shop for Lisa’s party. It has been 9 months since Taylor’s husband Russell committed suicide and she seems to be in really good spirits. The upset and drama seems to have left her life along with Russell.

The ladies all begin arriving for Lisa’s party and Lisa is taking it upon herself to introduce everyone to Yolanda. Lisa is also thrilled that Kim actually showed up. If you saw any of last season then you’ll remember that Kim rarely showed up anywhere she was supposed to be, let alone be on time.  Brandi arrives and slams Yolanda upon meeting her. She sums up Yolanda as that woman that knows and has slept with everyone. Yolanda is speechless with that type of introduction but Brandi moves on to attempting to talk to Kim. It’s a failed effort, Kim kinda runs off leaving Kyle and Brandi to stand in awkwardness. Obviously the drama from last year is going to hobble into this season as well.

Tonight’s episode wraps up with Kim hanging on the verge of disappointing Kyle, as usual. She just isn’t sure that she’ll be able to make Portia’s birthday party, but she offers absolutely no explanation as to why. Tune in next week to watch the sisters battle it out with the best of them!