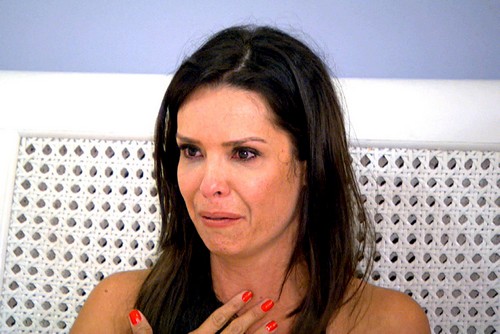 Tonight on Bravo a whole new episode of THE REAL HOUSEWIVES OF MIAMI airs called “Surrounded by Hot Water.” On tonight’s show after the infamous Rodolfo article, Alexia is determined to plea her case to Karent, but Karent has more important things to deal with when she learns of a family emergency. Later on, a special dinner becomes spoiled when Lea and Marysol trash talk each other’s businesses and bring old problems back to life.

On last week’s show show the ladies of Miami were packing up for a quick weekend getaway to Bimini in the Bahamas. With relationships being questioned, this healing trip was meant for some fun, relaxation, and repairing friendships. However, when Elsa predicted that this trip won’t go as the girls have planned, they definitely got off to a turbulent start. New alliances were made and Lea let her inner party girl come out! But one of the ladies received some devastating news about someone on the trip, and no one was prepared for the tidal wave of drama that comes their way.

Tonight’s episode is going to be filled with the usual Housewife drama and you won’t want to miss it, so be sure to tune in for our live coverage of the show tonight at 10 PM EST! While you wait for our recap hit the comments and let us know what you think of “The Real Housewives of Miami” season 2 so far! Also we have a sneak peek video of “A Better or Bitter Place” below!

The ladies are still vacationing in Bimini on this weeks’ episode and there is drama galore. Karent was informed last time around that her latin soap star boyfriend, Rudolfo is cheating and that has left her in pieces while smiling perfectly. Marysol is worried about Mama Elsa who sometimes doesn’t seem to understand the conversations they have. Maybe it’s the alcohol?

Lisa has a real girl chat with Lea of all people. Lisa and Lenny have had three miscarriages and she can’t seem to stay pregnant. She’s beyond worried that Lenny will leave if she doesn’t have a child soon.

Marysol decides that it’s time to move on from Phillip, her husband of two seconds, and finally get a divorce. It’s like a total epiphany moment for a woman that says she kind of flies by her ass when it comes to love.  Karent got a horrible call from her mother saying that her father is headed to the hospital do to his heart problems. Karent is stuck on the island and can’t get a flight home. Lisa and Joanna try to talk her into going for dinner and just having a nice night. Karent obviously wants none of that and she really doesn’t want to be stuck dealing with the other ladies who told her about Rudolfo.

The ladies sit down to dinner and have a good old fashioned blow out over everything. Joanna’s drinking, Marysol’s problems with Elaine, Karent’s  fakeness- just everything. At least they aren’t drinking yet! If they were this would be straight up ugly, instead it’s just a lot of shrieking.

Lea has had an axe to grind with Marysol for months now. It’s a mess that only Lea seems to grasp. It seems to come down to Marysol said that Lea let James do her dirty work. Lea is just not letting it go and insists that Marysol is a liar. Even Lisa steps into the mess and points out that there are bigger problems and worse things to argue about, if they must argue.

Lea goes on and on about being the bigger person all of a sudden. She says that she knows Marysol can’t communicate for shit and decides to stop fighting and instead hug it out. Marysol dissolves into tears and tells Lea how much she misses having her as a friend. Oh my god tune in next week to see how theses ladies will next waste 45 minutes before making up!