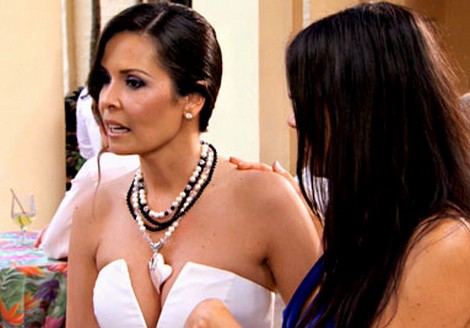 Tonight on Bravo a whole new episode of The Real Housewives of Miami airs called “Text, Lies, and Your Smile is Fake.” On tonight’s show after Elsa’s fainting incident, Adriana tries to figure out why she has trouble opening herself up completely to her fiancé, Frederic. Meanwhile, Joanna puts the pressure on her fiancé by giving him an ultimatum: marriage or breakup.

On last week’s show it was a brand new day in Miami and the queen bees of Miami’s high society are back. But Lea, Adriana, and Marysolwere about to have their world shaken by a new generation of super-privileged socialites. Meet Ana, Karent, Joanna, and Lisa. They were all hell bent on injecting some new energy into a city that has always revered the status quo.

On tonight’s show following up with Elsa after her fainting incident, Adriana ends up reflecting on why she has trouble opening herself up completely to her loving fiance, Frederic. Karent surprises her Latin soap star boyfriend, Rodolfo, with a romantic massage and gauges his feelings about marriage. Joanna also turns up the heat with Romain by addressing his stalling to get married after being engaged for 5 years.

An awkward confrontation ensues when Karent approaches Ana regarding her inappropriate texting with Rodolfo, which questions the loyalty between the women in the group. Secret issues are exposed at Lea’s Gala volunteer meeting by her larger-than-life drag queen friend.

Tonight’s episode is going to be filled with the usual Housewife drama and you won’t want to miss it, so be sure to tune in for our live coverage of the show tonight at 9 PM EST! While you wait for our recap hit the comments and let us know what you think of “The Real Housewives of Miami” season 2 so far! Also we have a sneak peek video of “Text, Lies, and Your Smile is Fake“ below!

Tonight’s show starts off with Alexia and Ana having a chit chat about Karent and her boyfriend Rudolpho’s relationship. Apparently Karent is super territorial about her man and should be. He has been sending questionable texts to Ana for awhile but then introduced himself to her at a party the night before, as if they’d never met. Karent decides to treat her man to a massage to relax him and then stresses him out with the marriage talk. She thinks they are fast tracking towards an engagement. She’ll get a clue eventually.

Lisa is married to a plastic surgeon named Lenny who spends all day, every day playing with women’s’ boobs. She shows up demanding that he put more pictures of her around the office so that the women who come to see him also know that he has a wife.

Interesting. While Ana is sending dirty texts to Rudolpho she is seriously dating a lawyer named Mark.

Adriana has agreed to live on the boat that her fiancé is restoring. She says it’ll be fabulous but that’s kind of hard to believe. As Lisa puts it, it’s going to be less yacht, more pirate ship and Adriana will hate it. They take their men and head to a yacht show which drives home the point that the thing Fredric is crafting for Adriana is pretty second rate. During their talk Lisa confides that she and Lenny have been trying to have a baby for three years with no shred of hope yet.

I get confused as to why these chicks go to Mama Elsa for advice. She says she never did anything with her life, she has spent most of it alone and most importantly, being a “see-er” didn’t prevent her from picking THE worst plastic surgeon in the country to butcher her face! But still, Adriana goes to her to discuss her fiancé. Elsa then heads to her daughter, Marysol’s office to cleanse it. I mean, she’s dropping rice and spraying perfume all over the place and Marysol is quite obviously used to her behaving this way because she continues working through the cleanse.

I think Joanna is the biggest bitch on this show. She’s that stereotypical, snotty model that you can’t stomach listening to. She decides to take her boyfriend Roanin out for dinner and tells him that it’s time they either get married or break up because those are her terms. Ironically, their five year engagement has been completely HER terms and now he no longer seems to care. I found myself wanting him to dump her right then and there on the spot.

Of course this episode will end with an event where all of the ladies are forced to interact. This time it’s a wine tasting at The Biltmore Hotel. Adriana takes this public event as the best time to pull Karent aside to tell her there are rumors that her man is a dog. Karent says that Ana only texts Rudolpho and it’s one sided. You see the blow out coming here, right? Because my guess is that Karent is going to need to confront Ana (who has a boyfriend, don’t forget!) about the rumor mongering. And while that confrontation barely begins this evening the real fireworks are being saved for next week!