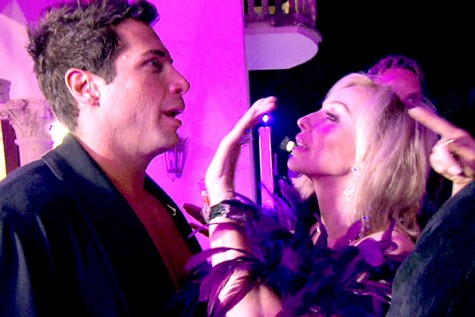 Tonight on Bravo a whole new episode of The Real Housewives of Miami airs called “Bras and Brawls Part 1.” Tonight is the first of a two part episode and on tonight’s show it still seems to be all vs. Karent, as the mood gets uglier and uglier.Adriana discovers Karent’s been making catty remarks about all the ladies, and isn’t taking her disses without coming out swinging.

On last week’s episode Miami’s elite was ready to celebrate Alexia’s Magazine Venue Party, but Adriana was not in party mode.  Last week was the night Adriana has been waiting for — to confront Karent’s mingling ways once and for all! Joanna found out that being a supermodel was sometimes not so super, when hidden emails revealed Romain’s dirty little secret.

On tonight’s show Karent can’t seem to get on anyone’s good side, and the mood just gets uglier when Adriana discovers Karent was making catty remarks about the other ladies. The stress levels are high as Lisa and Lea both gear up for their big charity fundraisers. When the night of Lisa’s Lingerie Party arrives, no one is prepared for what happens when the moon is full, Joe Francis is in town, and half-naked Miami socialites start acting as naughty as their underwear.

Tonight’s episode is going to be filled with the usual Housewife drama and you won’t want to miss it, so be sure to tune in for our live coverage of the show tonight at 9 PM EST! While you wait for our recap hit the comments and let us know what you think of “The Real Housewives of Miami” season 2 so far! Also we have a sneak peek video of “Bras and Brawls Part 1” below!

Tonight’s recap:  Tonight’s episode begins with Lisa planning a Lingerie Party to benefit breast cancer- because the two go hand in hand, according to her. She calls to see if Lea will be there and suspects that Lea is frowning upon her party. Lea also has a much more upscale gala planned the night after Lisa’s trash fest.  Lea is plotting seating charts and none of the ladies want Karent seated near them. It truly is the ladies vs. Karent with the exception of Joanna.  Adriana has stumbled onto a newspaper interview that Karent gave where she bashed her fellow castmates. They are basically flashy women with Botox for brains, according to Karent and it’s sitting badly with all of them. Lea hopes the ladies can put their anger on pause for her gala event, but I don’t see that happening.

Joanna is an animal activist to the millionth power. She thought it was hilarious to shoot a PETA campaign ad of her wearing a pink bikini. The catch? Her bottoms are stuffed with fur- pubic fur. She thinks it’s hilarious because in her eyes, people that wear animals are just arrogant.  This chick is a real trip isn’t she? She doesn’t realize that she comes across as cold and arrogant 90 perfect of the time herself!

Joanna takes Karent to her favorite boutique to look for a dress and Joanna decides to tell her how the girls are slamming her. Karent insists that the article printed was fabricated and not her words at all. She never thought it would ruffle feathers because if the comments don’t apply then why take offense. Joanna tells her she’ll have her back at the lingerie party if she needs help. It’s a good thing because Adriana has every intention of going at her.

Joanna’s little sister Marta was kind of in the way of Joanna’s relationship so she moved out- and into Lisa’s house! Lisa really does seem to be a sweetheart but even she is a bit tired of Marta is acting like she’s on an extended vacation. While Lisa is starting to freak out because everything with the party is behind schedule, her husband Lenny is even worse. People are arriving and even half the staff is missing.

Lea decides she will attend Lisa’s lingerie bash and brings a controversial guest- Joe Francis. Of course Lea manages to take a shot at Lisa’s party but ironically enough, Joanna is disgusted to be in the same place as Joe Francis, but she is more disgusted by Marysolwearing fur. Karent decides to tip Marysol off, even though she’s supposedly Joanna’s good friend. These Miami chicks aren’t so good with the loyalty thing. Marysol saunters up to Joe Francis as he is dishing on his relationship with Joanna. He was the first person to put her on television, shortly before he screwed her AND her sister. Karent, now known as the carrier pigeon, tells Joanna and she flips out, as usual. This chick is always screaming at someone for something, usually in public.

Joanna calls Marta over  and her reaction to the claim is not the same as Joanna’s. Lisa is pleading with people to get along but that doesn’t look to likely. Marta let’s Joanna know that she did hook up with Joe. Tune in next week for the fur to really fly.