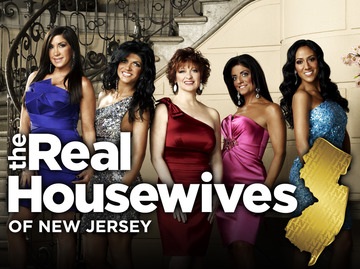 Well, last week on Real Housewives of New Jersey viewers saw a huge fight between Theresa and her brother Joe that in one way or another, affected all of the other housewives. As expected, this week’s episode opens with Theresa in the car with her husband and she is recapping the blowout. If you’ve watched this show for ten minutes you already know that Joe Giudice and Joe Gorja hate each other so the chat goes badly.

Anyone with a backbone would not let their husband verbally incinerate their entire family, but of course Theresa half agrees with him instead. Meanwhile at the gym, Joe Gorja vents his frustration to Rich and has guilt for being so awful to Theresa. Nice to see him have a conscience. Maybe he has part of Theresa’s as well because when it comes to right and wrong, she clearly is missing something.

Changing pace, Caroline’s daughter, Lauren is trying to lose weight and a very real conversation with her dad ensues.

Theresa has a phone conversation with Jacqueline about fighting in front of her kids and Jacqueline points out that Gia is growing up and pays more attention then maybe Theresa realizes. Everyone is gearing up for “Field Day” and Jacqueline goes shopping for workout gear with Lauren. Jacqueline takes it back to school and has planned a fun athletic event a’ la red team vs. blue team. The girls hash out breast reductions while perusing the racks of clothing.

Am I the only one that hates seeing Theresa dress her growing girls identically? Anyway, it’s clear Theresa’s kids have more of an “education” than maybe they should as conversation includes bra shopping, tampons and boob jobs.

Back at Jacqueline’s house, she and a few of the guys (including Albie and a friend or two of his) anticipate the potential explosions during field day once they realize Theresa and Melissa will both be attending. Caroline lays out her son for ragging on Lauren about her diet.

Theresa takes TEN year old Gia shopping for a bra and by the end of the scene I’m grateful I don’t have to listen to that disrespectful kid every day of my life. Already, she IS her mother.

While driving to field day, Joe Gorja throws wife Melissa his phone so that she can read the texts he has sent to Theresa. Clearly he loves his sister. As the Gorja’s arrive at Jacqueline’s, Melissa has a kitchen pow wow with Caroline and Jacqueline and tells them that Joe reached out to his sister. Theresa apparently had lied and said that there had been no contact from her brother. Caroline and Jacqueline agree not to stir the pot and squash the talk before Theresa arrives. Kathy shows up with not one but two trays of food.

Joe takes the time to talk to Gia about the fight and reassures her that he loves Theresa and wants them to get along.

He ends the chat by dunking Gia in the dunk tank set up for the day’s fun and games. Theresa, of course, won’t go near the tank- because she had her hair done the day before. Finally after all the build up, they pick teams as Caroline watches the babies on the sidelines.

They start off with Tug-O-War and potato sack races. Everyone seems to be having a really good time and all the nonsense is temporarily squashed. Gia pretty quickly shows her competitive side and lashes out. Any time the red team loses Gia throws a fit and screams and cries that the blue team is cheating. My god someone needs to muzzle that kid. I’ll say it again, she IS her mother. Caroline tries to help and finally says it best, “Children are what they live.”

Both Caroline and Jacqueline try to calm the brat but it’s hopeless. She continues in drama queen mode until Theresa finally comes to her rescue. She pacifies her rather than reprimanding her and then gets into it with Jacqueline and Caroline. Theresa makes the mistake of saying she would rather be down the shore then at field day and that is nothing short of an insult to Jacqueline.

In the end Theresa tells everyone to leave her child alone because she is the parenting. Caroline and Jacqueline hug it out with Gis but the message has already been made clear: throw a fit and mom takes your side no matter how much of a brat you may be.

Next week RHNJ looks like it will focus a lot of its time on Rosie and her lesbian ways. What did you think of tonites show? Tell us in the comments below!

We are live blogging the show with all the  up-to-the-minute details.  So make sure to come back often and refresh to get all the current updates.