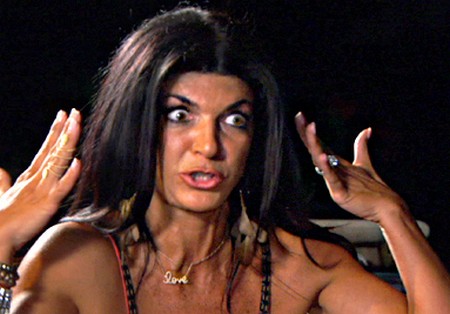 Tonight on Bravo is an all new episode of the Real Housewives of New Jersey. On tonight’s show Jacqueline accuses Teresa of planting stories about herself in the tabloids, and covering up her financial troubles. If you missed last week’s show called “True Love, True Lies” there is a full and detailed recap here for you!

On tonight’s show titled “Best Friends for Never” Jacqueline accuses Teresa of planting stories about herself in the tabloids, and covering up her financial troubles. The discussion gets heated at the mention of Teresa connecting with ex-housewife Danielle Staub on Twitter.

Jacqueline also learns her daughter Ashlee may be returning to her old ways, while Lauren makes a final decision regarding her season-long quest to shed weight.

Kathy and Melissa attempt to rise above the gossip, but rumors of Teresa’s potential incarceration swirl throughout town. As Teresa meets with her bankruptcy attorney to weigh her options, Jacqueline decides it’s time for her friend to come clean.

Tonight’s episode is going to be filled with the usual drama and you won’t want to miss it, so be sure to tune in for our live coverage of the show tonight at 10 PM EST!  While you wait for our recap hit the comments and let us know what you think of “The Real Housewives of New Jersey” season 4 so far!  Also we have a sneak peek video of “Best Friends For Never” below!

RECAP: Here we go with another episode of the Teresa Show- er- Real Housewives of New Jersey!  Tonight’s new episode starts with Joe Giudice working in the backyard, making storage space on his family’s property and adding a carport.  Teresa is babbling about how even though they’re bankrupt they’ll never be poor.

Caroline goes to lunch with her daughter Lauren, who is trying in vain to lose weight.  Lauren likens herself to an addict that doesn’t get better until they want to.  Maybe she doesn’t truly want to lose the weight yet.  Caroline keeps encouraging her to live her life and to gauge her happiness on herself, rather than what everyone else wants for her. She then proceeds to call her daughter a chunk-a-monk!

Jacqueline is on the phone checking on her daughter Ashlee, who is living in Texas with her father.   Her daughter has been in so much trouble in the past and it looks like her father no longer intends to keep her in Texas now either.

Lauren is hanging with her brothers picking apart a salad while everyone else eats pizza. She looks miserable and the guys don’t help any.

Jacqueline and her husband are sitting down to coffee discussing a magazine article on Teresa and Joe. They worry about the possibility of BOTH of them going to jail.  Now we jump to Teresa and Joe in their attorney’s office basically trying to wriggle out of charges.  Their attorney has filed to have Teresa’s end of things settled out of court and so far, it’s not happening.  Teresa keeps rambling about how this serious issue makes her and Joe stronger.  It has also helped her to figure out who her real friends are.  She believes Jacqueline is a true friend but Jacqueline questions whether Teresa is profiting from the pity she gets from others. She also claims that Teresa plants things in the press to get paid.

Melissa and Kathy are sitting outside talking and sure enough, the topic turns to Teresa.  Another magazine claims she is going to jail.  Kathy is discussing her clashes with Teresa and she just wants the truth once and for all. Melissa encourages Kathy to go and talk to Teresa but Kathy thinks it’ll be a mistake and a half.

Now it’s time for Teresa and Jacqueline to talk.  Jacqueline is crying and very worried about Teresa.  She’s scared about the possibility of jail time for her friend.  Teresa denies everything and suggests Jacqueline call her attorney for more information.  Jacqueline is kind of relentless in her questions and mentions Teresa saying she sells articles to the press.  Teresa back pedals on this line of questioning and clearly doesn’t appreciate the insinuations.  Meanwhile Jacqueline insists Teresa has told her these things.  She is also worried because Teresa seems to now have a connection to Danielle Staub, something that is unimaginable to Jacqueline. It turns into a screaming match, as most serious conversations with Teresa do and on cue…in walks Caroline.

Caroline starts the same line of interrogation that Jacqueline took moments earlier.  Caroline is also furious because she feels Teresa has slandered her to the press.  There comes a point in this fighting where you just sit and watch it all dumbfounded.  Caroline actually tells Teresa that she’s all smoke and mirrors and simply crazy.  She tells Teresa her apologies are shallow and unaccepted.  Jacqueline finally concludes that the best thing that she can do is distance herself from her family (ahem, Teresa) because it’s really in her best interest.  Teresa says she feels like she is going through a friendship divorce.  Next week we’ll have to tune in to see the fallout of this huge blow out.