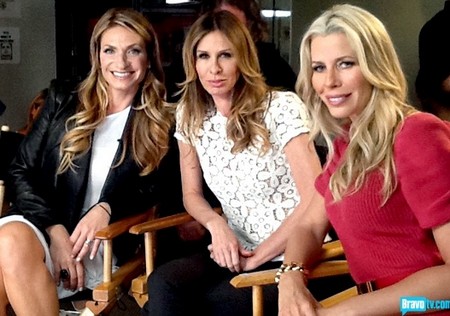 Tonight on Bravo a new episode of Real Housewives of New York City airs. The episode is the second in the fifth season and it is called ‘Say What You Mean, Just Don’t Say It Mean.’ We will be covering the show tonight at 10PM EST with all the drama.

On last week’s premiere episode LuAnn confronted Ramona on her comments last season about her parenting skills. Romana is unapologetic and walks away. If you missed the episode you can read our full and detailed recap here.

On tonight’s episode LuAnn and Ramona attempt to clear the air, while Sonja deals with issues at her abode. To settle their differences, LuAnn and Ramona finally meet up to clear the air. LuAnn wants Ramona to own up to blackmailing her, but Ramona sees it differently and denies any wrong doing. Carole and Aviva head downtown for shopping and chatting while further uptown, Sonja assesses the severe water damage caused by Hurricane Irene to her townhouse.

Will flirting with contractors help her? Meanwhile, Ramona gets upset after a lunch with Aviva where she discovers LuAnn’s been a little too chatty and when Sonja goes M.I.A. at a GLAAD Awards event, no one is surprised by how she ends the evening.

We will be live blogging Real Housewives of New York with all the up-to-the-minute details at 9PM, so don’t forget to come back to enjoy all the drama!  Refresh often to make sure to get the most current info!

RECAP: Last week we were introduced to a new and so far, not-so-improved RHONYC.  There is a new crew of ladies- Heather Thomson, Carole Radziwill and Aviva Drescher- that have been thrown into the mix and I’m not so sure that it’s a good thing.

This episode begins with Aviva and Heather sitting down to dinner with their husbands.  Boredom ensues.  Heather discusses her very Jewish husband and how she has yet to fully convert.  It is also brought to light that Aviva’s ex, Harry, has slept with both LuAnn and Sonja.  Well, I can now see what will be at the root of many fights this season.  Can we throw the guy into bed with Ramona and Carole just for the heck of it?  I mean why leave them out?

LuAnn and Ramona decided to meet up inCentral Parkto talk out their long-standing differences.  Ramona starts off lambasting LuAnn and it can only be downhill from here.  LuAnn feels insulted by the constant slights at her single parenting techniques.  Of course, Ramona gets overly emotional almost instantly.  Clearly these two have problems but this whole exchange feels completely staged and contrived for the sake of the cameras. It just never ends. Two catty bitches that just need to decide they’ll never be friends and leave it at that.

Carole and Aviva try to shop a bit together.  Carole loves Aviva because, as she puts it, “she’s my superfan.”  These two discuss the LuAnn and Ramona situation because, well, obviously this episode will revolve around their fight.  They also discuss Carole’s casual relationship with some dude in Aerosmith.  I can’t help but wonder if he knows about their relationship.  Aviva and Carole discuss it and Aviva says the relationship is “cool” about a hundred times but then tells the camera how she needs to be only in committed relationships and doesn’t get Carole’s arrangement.  Backstabbing on camera already, oh boy!

Sonja’s has some renovation’s that are necessary due to Hurricane Irene.  Rich is checking out the damage while Sonja is checking out him.  She is unbelievably tacky demonstrating falling off of a twin bed while trying to get him to ogle her in her skinny jeans.  Beyond pathetic and it all goes down in front of her daughter.

I guess Carole really is with Russ from Aerosmith because, Tah-Dah, he shows up on camera with her. They are driving around NYC listening to a song that she supposedly inspired.  She loves their open relationship but then talks like he is everything to her.  They like missing each other but somehow I have to doubt he misses her while hooking up with randoms back in Boston!

Heather and her husband have decided to throw a party celebrating her recently deceased fathers’ life.  She reads a poem he wrote for her and cries over how talented he was.  Unfortunately, I could care less. These women just don’t make me WANT to watch. There’s nothing at all endearing here and that’s making this show drag.

Even when Heather sits down to dinner with her kids, it’s devoid of any emotion.

At least when LuAnn interacts with her son it’s a normal mother/son interaction.  Okay, so maybe they are speaking fluently in French, but there is emotion there!

Ramona has a sit down with Aviva because as Aviva puts it, “where there’s smoke, there’s usually fire” and Ramona is covered in smoke.  They make a pact to be honest with each other and if there’s a problem, to talk it out.

Sonja was a presenter at the GLAAD awards which served as an occasion for most of the ladies to meet up.  More pretentiousness follows.

The big question for next weeks episode?  Will anyone care to tune in?