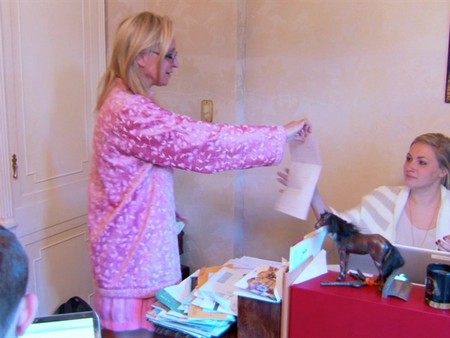 Tonight on Bravo is an all new episode of the Real Housewives of New York.  On tonight’s Sonja books her first catering event while Heather and Ramona continue to tussle. If you missed last week’s show called “Diss-Invite” there is a full and detailed recap HERE for you!

Spoiler alert: If you’re one of those people who doesn’t like spoilers, stop reading now! We have some juicy spoilers for you about the season 5 episode 5 of Bravo’s “The Real Housewives of New York!”

The last time we saw our favorite housewives, Ramona invited Aviva, Carole and Sonja for lunch to discuss her current issues with Heather, however, Sonja choose to have a secret rendezvous with LuAnn instead. LuAnn voiced concern that Ramona had control over Sonja but Sonja sets the record straight.

On tonight’s show Aviva and Heather meet up to discuss the London trip, and Heather stands by her decision to leave Ramona behind. LuAnn also heads to an acupuncturist to see if having another child is possible. Aviva hires Sonja to throw a fifth anniversary party for her and her husband, leaving Sonja excited, but concerned since she’ll be in London (sans Ramona!) during most of the planning.

In an attempt to smooth things over, Heather invites Ramona shopping along with Aviva and Carole. When Ramona and Heather sit down to try and talk out their issues, things get escalated quickly and Ramona leaves without an outfit or a London invite.

Tonight’s episode is going to be filled with the usual Housewife drama and you won’t want to miss it, so be sure to tune in for our live coverage of the show tonight at 10 PM EST!  While you wait for our recap hit the comments and let us know what you think of “The Real Housewives of New York” season 5 so far!  Also we have a sneak peek video of The “Cool Girls”  below!

Tonight’s recap: It’s crazy Ramona time. Remember, she’s the only lady not invited by Heather to spend a girl’s weekend in London and she is steadily unraveling over it.  Heather meets up with Aviva to chat about London.  Aviva isn’t going but wants Heather to know that she’d really like to be with them if she could.  Aviva understands why Ramona is hurt to be excluded.  She mentions being the kid in gym class that was picked last.  Heather explains that as a business woman, she can’t risk Ramona running her mouth and making a fool out of her.  Heather basically concludes that Aviva has crawled up Ramona’s butt to be her friend.

Luann has decided to try out an acupuncture fertility clinic.  She and the boyfriend are doing well and she seriously wants another child in spite of being in her mid-40’s.   She wants to stick to a holistic route.  She has actively been trying to get pregnant for a year now.  Who knew?

Heather’s son Jax was born with a rare liver disease and he actually had a liver transplant.  We hear all about it as he is visiting his doctor for a regular checkup.

Aviva meets up with Sonja to have a drink. The topic is? Ramona!  After lambasting Heather for not inviting Ramona to London, Aviva is now trying to separate herself from the Ramona backlash.  As Sonja puts it, ‘It’s an invitation, not an obligation.  We learned this in fifth grade.  Not everyone is invited to the birthday party.”  The point of the meeting is that Aviva wants to book Sonja to plan her upcoming party.

Carole decides to cheat on her boyfriend and go on a date with a Turkish guy.  The problem is he is 31 and she generally only dates men her age (That’s somewhere between 37-45).  He is very intense and she is almost too laidback for him.

I love how Ramona strolls in to a restaurant and appears drunk before she even sits down.  She hooks up with Carole before meeting up with Heather to shop.  Ramona is losing her mind over London. She finds out that Carole is technically a princess and almost peed her pants in shock. (That’s a direct quote).

Aviva doesn’t want to call attention to the fact that she has a prosthetic leg, so Heather goes and tells the sales people helping them shop for things for London. Nice move Heather.  Ramona walks in to join the girls and they suggest she have a fashion makeover.  She is horrified because her look is already fabulous.  Or something.

Finally, it’s time for “the talk” between Heather and Ramona.  You knew it was coming.  Aviva is caught in the crossfire trying not to offend anyone.  Heather and Ramona are having a tit for tat fight over who doesn’t like who.  It’s like watching 7th graders fighting at lunchtime.  Aviva is still campaigning for Ramona to go to London.  Will she join the ladies on the trip?  We’ll have to tune in next week to find out!