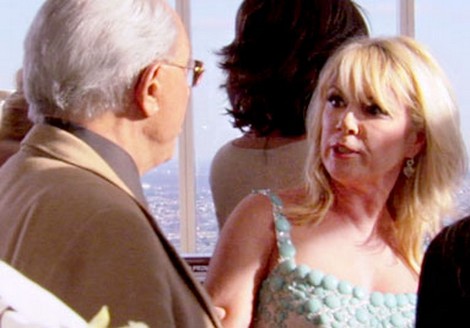 Tonight on Bravo is an all new episode of the Real Housewives of New York called “Don’t Make Room For Daddy.”  On tonight’s Sonja’s meeting with her ex-husband didn’t go as planned, and she claims she’s ready to take legal action against him. Later on, Aviva and Lu Ann go alongside Heather to visit the location of her latest “Yummie Tummie” fashion show. If you missed last week’s show called “What Happens in St. Barths Doesn’t Stay in St. Barths” there is a full and detailed recap HERE for you!

On last week’s show back home after the crazy trip, Ramona invited Sonja and LuAnn to their mutual friend’s home for a dinner party. LuAnn brought Jacques, causing Ramona and Sonja to speculate over whether or not she told him the truth about what happened with Tomas in St. Barths.  Meanwhile, Carole was in for a surprise when Sonja took her to her shirt tailor, only to find he was one of Carole’s former suitors.

On tonight’s show Aviva’s father, George, is back in town and she takes him to her favorite health food store where George picks up some unusual items. Sonja continues to be disappointed by her ex-husband and after much negotiation of a settlement, she realizes she is ready to take further legal action.

Aviva and LuAnn join Heather for a walk through at the location of Heather’s upcoming Yummie fashion show. To Aviva’s surprise, Heather has a special request for her.

I really don’t think I’ve liked any of the housewives’ from any season as much as I dislike Aviva. Everytime she’s on screen I still feel like I’m looking at an old lady version of the rocker-chich muppet named Janice. Anyway tonight the show starts with her shopping with her father, George, for supplements to help his libido.

Sonja is still working out the details of her divorce- 6 years after proceedings began. She’s trying to reach a settlement and on the emotional side she really needed to see her ex. Instead she spent the day with both of their attorneys trying to hash out details. She didn’t see the ex and is facing the harsh reality that she’s not going to be able to keep her home. Sonja later tells a friend that she hoped they could be friends and the reality is setting in and it hurts. She says he should be making sure that his daughter is secure. Instead she is ready to sell everything and sue her exes’ ass. If she was on a downward spiral before,  it’s about to get so much worse.

Heather seems to be in her element directing others so to see her putting together a fashion show seems as good a job as any. She asks Aviva to walk in the show and of course she says yes and then starts babbling about how she is a 41 year old amputee blah blah blah. Don’t most people want to be seen as normal rather than constantly make themselves stand out for their personal issues? Yeah. Not Aviva.

Sonja has always had a painting of her ex hanging in her home because it carries sentimental value. She has decided it’s time to rip it down and sell it for whatever it could be worth. She enlists LuAnn’shelp to watch her cry as she makes room on her wall for more expensive art.

Sonja is also getting very real and understanding that she took great care of her husband and he still left. Doing it all right doesn’t mean it works in the end.  Sonja also decides to take down the painting of herself as well. It’s her past and she needs to store it there.

Finally, the battle I’ve been waiting for. Aviva decides to have brunch with a (not so) sober Ramona to discuss the St. Bart’s disaster. Within seconds Aviva tells Ramona that she’s disgusted by her. She also comments on Ramona’s dark sunglasses hiding her already drunk eyes. Aviva is disgusted by Ramona at age 56 dancing on tables, “gyrating. It’s disgusting behavior.” Ramona calls her very uptight and a buzz kill, I must admit that’s exactly what she is. Ramona may exist on her own brand of Pinot Grigio but this chick is just too much. She would suck the fun right out of anyone’s day. I’m not a huge fan of Ramona but when you put her at a table with A-Diva I’d pick her every single day.

The best quote from A-Diva, “Friends don’t let friends drive drunk. “ to which Ramona asks, “Who was driving anywhere on the island??” Apparently A-Diva has made Ramona’s lack of sobriety her own personal cross to bear. Seriously, what the hell?

Ramona has signed up to do a charity fashion show and the proceeds go to benefit domestic violence. Forget the charitable cause; this evening is about Ramona telling Heather and Carole about her clash with Aviva. She is praying that Aviva is a no-show and she thinks there’s a good chance she’ll stay home because Aviva is afraid of everything and they are on the 105th floor of a penthouse.  George does make an appearance which is interesting to me. He is a sex addict, which is fine with Aviva, but no one elses’ sexuality is okay to her.  Anyway, George says that his daughter is extremely upset and the fear of people making fun of her is debilitating. Jeez what isn’t debilitating to Aviva? I mean everything in her life is an obstacle.

For someone that has overcome a lot I’d honestly expect Aviva’s approach to life to be a whole lot different. Ramona thanks George for coming and doesn’t want to even discuss his daughter. He is asking her to apologize which totally flips her out. She’s screaming that she’s not a drunk and doesn’t cheat on her husband. George grabs Ramona’s arm, not the thing you do during a heated argument at a domestic violence event.

George calls Ramona a “trailer turd” as she has security escort him out to the sidewalk. Ramona is grateful to Carole for having her back at least in the moment. Carole says she felt horrible for George but Aviva should never have sent him in the first place. Sonja actually is very logical saying that Aviva sent her father to do her dirty work and it’s wrong. She points out that Ramona is surrounded by friends while Aviva has worked over time to secure enemies. Tune in next week for the season finale which means another blowout between Aviva and Ramona!