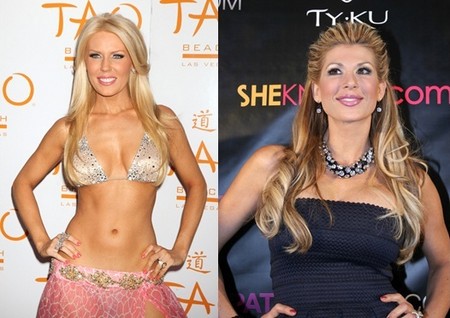 Those of you who’ve been watching The Real Housewives of Orange County know that the close friendship between cast members Gretchen Rossi and Alexis Bellino seems to have fallen apart this season. Why, you ask? It depends on which lady you ask, as the two seem to have very different versions of what happened.

If you talk to Alexis, she will say that it is because this season, Gretchen became friends with their co-star and once bitter enemy, Tamra Barney, who Alexis called “poisonous” on Part One of last night’s Reunion episode. Alexis believes that Gretchen’s opinion of her has been influenced by Tamra, who has made no secret of the fact that she is not fond of Alexis.

If you talk to Gretchen, she will say that Tamra had nothing to do with it. Gretchen claims that Alexis’s behavior towards her changed after she and Tamra became friends. She says Alexis started acting paranoid and insecure. Gretchen also insists that her heart was in the right place on the Housewives’s trip to Costa Rica, where Gretchen joined in on what Tamra and rookie co-star, Heather Dubrow, called an “intervention” on Alexis, where they called her out on what they perceive as her constant name-dropping and attempts to prove she is wealthy.

In last night’s Real Housewives of Orange County Reunion (Part 1) episode, Gretchen insists to Alexis that she cares for her. “I love you enough to jeopardize the friendship to tell you the truth!” she laments.

If that’s the case, one can’t help but wonder why Gretchen did not tell Alexis this “truth” before? It was only after she and Tamra became friends that Gretchen decided to tell Alexis “the truth” about the way her behavior comes across to others. Granted, some may say Alexis’s comment about the private jet is a prime example of what the other ladies are referring to when they say she constantly feels a need to prove how wealthy she is, but that never seemed to bother Gretchen before. Or, if it did bother her before, she never felt the need to voice it until she became friends with Tamra.

Nonetheless, as the seventh season of The Real Housewives of County comes to an end next Monday, many are wondering where former best friends stand now. Have they made up? In this exclusive Bravo clip, Gretchen let’s us know the current status of her friendship with Alexis.

What do you think, readers?