‘The River’ Episode 1 Review — There’s Magic Out There

BY Nicholas Sanford on February 8, 2012 | Comments: 2 comments
Related : The River 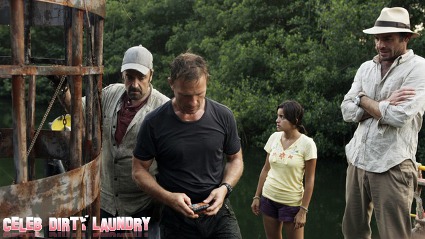 The River, which aired last night on ABC in a 2-hour premiere, is the latest project from the minds that brought us the groundbreaking Paranormal Activity franchise. The show tells the story of a group of individuals who set out to find/rescue famous explorer and wildlife expert Dr. Emmet Cole, who’s lived his entire life by the creed “There’s magic out there.” Turns out he was right. When his beacon mysteriously activates after six months, his wife and son, along with a camera crew eager to capture the voyage, experience firsthand the nature of the jungle. Its magic. Its mystery. And its horror.

There was a lot of hype surrounding this show and many people were excited to see if the current of this river was strong enough to sweep them away. While much of the acting is sub-par, the show’s interesting supernatural premise (thanks to the innovative camera techniques ala Blair Witch Project) proves to be a redeeming quality. The unique environment in which its filmed, as well as the fresh mythologies/folklores the writers have created, give fans of the paranormal genre something new to explore.

When the spirit of Dr. Emmet Cole mysteriously enters Jahel, the message is clear… go home! Instead, Tess determines to go into the jungle to find clues to Cole’s whereabouts. While on their mission, they discover a tree draped in children’s dolls that they suspect is there to ward off the “spirit of the abandoned girl” who drowned in the river. Then, when a member of the crew goes missing, the group realizes they’ll have to endure a nightmare in order to appease an angry spirit and get their loved one back.

It’ll be quite interesting to see where this journey takes us. Last night we were introduced to many wonderful elements, including a mystical necklace with otherworldly powers, a young girl who can channel spirits (which are carried on the wings of dragonflies), and a mysterious nexus of magic known only as “The Source.”

For those who watched the episode, what was your favorite thing about the show? What do you think “The Source” is? And, even more specifically, what do you think that security guard/weapons specialist is up to?

For me, the magic in this show existed in the nuances — the details. For those who’ve watched any of the Paranormal Activity films, you’re well aware of the fact that it’s these subtleties that generate the fright and overall creepiness. A small camera shift here. A slow turn of a doll’s head there. You never quite know what the next camera angle/shot is going to deliver.

While there were definitely predictable moments and obvious plot turns, this pilot-episode was, for the most part, a pleasant surprise with sparkling moments.

All-in-all, there was definitely some magic out there for me — magic that I’m eager to explore and discover over the coming episodes. What about you? Did you find magic in The River?