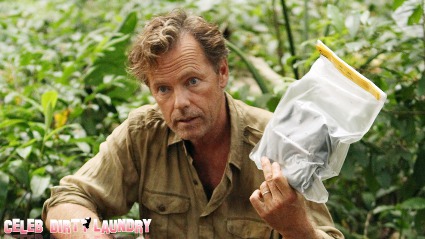 On last night’s episode of The River, we found out that Dr. Emmet Cole headed to a very specific region of the jungle: Sahte Falls. We saw past video tapes (found by Tess and the crew in a dry bag by a waterfall) of Dr. Cole adventuring into the forest. He talked of a mysterious tribe, one where health was abundant and disease was virtually nonexistent.

The episode focused largely on these newly found videos and, as the crew continued to watch them, they eventually saw Emmet and his crew experience some unfortunate jungle drama. While camping, they came across a monkey completely skinned. Jahel, our mystical guru who knows every freakin Latin legend ever written, tells the crew that he wasn’t being bothered by a run-of-the-mill evil spirit. Rather, it was Ill Tunchi. And she doesn’t come “to scare; she comes to kill.” And she’s a demon.

We also learned a rather usettling detail . . .  Lena was the one who activated the beacon that sparked the entire rescue! BAH! You stress me out, Lena!

We see more video tape. One of Dr. Emmet’s crewman was also skinned alive, just like the monkey. The demon eventually came for him, but he eventually “solved” the demon’s riddle. At this point, Emmet appears a tad crazy. He set up camp in the jungle and was without fire, until he started meditating and — yep, you guessed it — fire erupted in his hands. So he simply used it to start a fire.

Lena discovered a tattoo on the back of her neck that matches the exact design as Lincoln’s necklace — the one given to him by his father.

When we went back into the video tapes . . . we saw Dr. Cole climb a tree for  some mangos, but unfortunately he fell out of the tree and broke his ankle. He was starving, and contemplated eating his dog, but just couldn’t bear the thought of doing that. Lying on his death bed, starving, he apologized to Tess. Then something strange happened, as it always does in the jungle. The demon returned, but . . . it didn’t kill him. Instead, two tribal men grabbed him, healed him, and then placed him outside the gate of an outpost.

The crew went to the outpost.

But when they got to the outpost no one was there.

This episode was good, simply because it provided more of Dr. Emmet Cole’s back story. Not much else to say, other than I think we’re getting a bit closer to discovering the Source and where exactly Emmet is at. What did you think of the episode, did you watch it? If so, let us know what you thought in the comments section below.

Remember, people . . . There’s Magic Out There!