BY William Blesch on May 20, 2012 | Comments: Leave Comments
Related : Recap, Television, The Simpsons 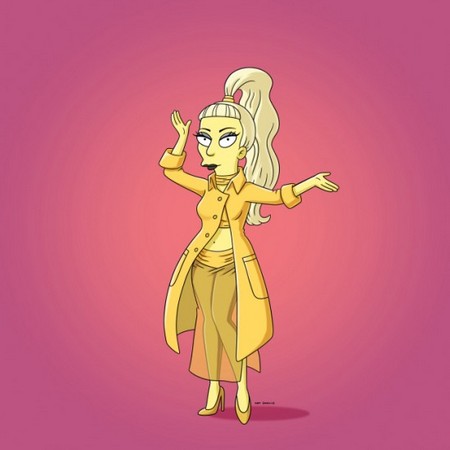 Tonight an all new episode of The Simpsons airs on Fox and tonight is the season finale.  Stand by as we live blog tonight’s episode with all the up-to-the-minute details.

On tonight’s episode ‘Lisa Goes Gaga’ Lisa tries to reverse her status as one of the least popular girls in school by ghostwriting positive things about herself on the school blog. When her plan backfires, her social ranking plummets to a new low – until a psychic force tells Lady Gaga (guest-starring as herself) that Lisa needs her help. With Gaga’s assistance, Lisa and the entire town of Springfield realize that being yourself is better than being like anyone else.

From the preview Lady Gaga puts on a concert – she sings: “When they’re young, all little monsters learn that they are scary. Ugly, stupid, shunned by cupid, overweight and hairy. But every monster needs to find that secret deep inside. That transforms Dr. Jekyl into sexy Mr. Hyde. All my monsters are beautiful … Monsters don’t need implants or a bitchin’ monster car, monsters only need to love the monsters that they are.”

Lady Gaga tweeted about tonight’s episode, “IM SOOO EXCITED FOR THE SIMPSONS. “Lisa Goes Gaga” episode. They did such an amazing job. I hope you like my voice-over acting debut! :) <3″

We will be live blogging the episode with all the up-to-the-minute details at 8PM EST.  Don’t forget to come back to this spot and refresh often to get the most current updates!

Tonight’s recap:  It is a typical day in Springfield, Ralph is acting like dog, but they didn’t know that something was about to happen, although the fish knew and the mormons knew, then everybody else finds out, it’s the “Lady Gaga Express” that’s coming because the farmers find diamond crusted eggs. Gaga first gets a makeover and some gear on, she is in a train and tells the conductor to first take some clothes off. Gaga feels like she should stop by Springfield to help the people and she just can’t ignore a billboard in pink.

At school, it is time for the “popularity awards”, Bart Simpson gets an award four years out of four. Now, the award for least popular student, Lisa Simpson is called up and she is reluctant to accept it. She does go up on stage but everyone laughs at her.

Gaga wants to wear her outfit that she wore for the pope and her manager tells her JLo wore it recently, Gaga tells him to burn it.

At dinner, Lisa is really upset, Millhouse brings in the paper there is an article that is actually in favour of Lisa and doesn’t feel that she should have gotten that award.

Message boards are all talking about Lisa and she is starting to get really popular. Bart reveals that it was actually Lisa that wrote the good things about her and announces it to everyone in the school yard.

Gaga is rehearsing in the train when she has a vision of Lisa crying on the sidewalk. It is time for Gaga to arrive, a lot of the people of Springfield are at the train station. Meanwhile Lisa thinks this is the end of her because all she had was her integrity and that is gone.

Homer tries to cheer Lisa up by turning her upside down and he literally picks her up and turns her around. Gaga comes out of the train for her little monsters and Moe tells her that he only half monster and half Armenian. Grampa Simpson shouts in the crowd that he loves Lady Gaga.

Lisa and Homer are also in the audience, when Gaga asks if everyone loves themselves and just as she is ready to leave, she spots Lisa. Lisa tells Gaga to stop because she has had enough attention for one day. Gaga suggest that they go talk in private.

When they arrive home, Ned Flanders gives Gaga a piece of his mind. Inside the house, Lady Gaga and Lisa look at the message board and Gaga calls them all bastards. Lisa tells Gaga that she is giving up and wants to be alone. Bart walks in and shows Gaga her biggest threat, “Lady Googoo” which is really Maggie dressed up.

Gaga and Marge are talking over cookies and milk, they are both worried about Lisa. Gaga tries to comfort her and when that doesn’t work Gaga kisses Marge on the lips. Later that night Homer and Marge have great sex and he says this is “better than when Hillary won the New Hampshire primary”.

The next day Gaga arrives in the park in a giant egg to see Lisa who just lets loose and has a tantrum, she just wants to be left alone. This causes one of Gaga’s monsters to ask if he can kill Lisa and Gaga starts crying tiny diamonds and runs away.

Homer helps Lisa to take stock in how ungrateful she has been and she’s off to the train station. Gaga’s train is almost leaving when Lisa arrives and thanks her for allowing her to let out all the rage and rejection on her. Gaga tells her that there is one last thing she has to do before she can become a little monster, she has to sing. Lisa gets up and sings with Gaga, then when they are finished Moe comes running up and asks Gaga if she could help him with his self esteem and she says that she’s not that good. Moe is all cool about it, then gets hit by the train.

The narrator ends the show claiming to be one of Gaga’s dancers, he was the one with the most spangly crotch!

That’s it for this season, did you enjoy the episode? My favourite character tonight was Moe, he made the whole show.