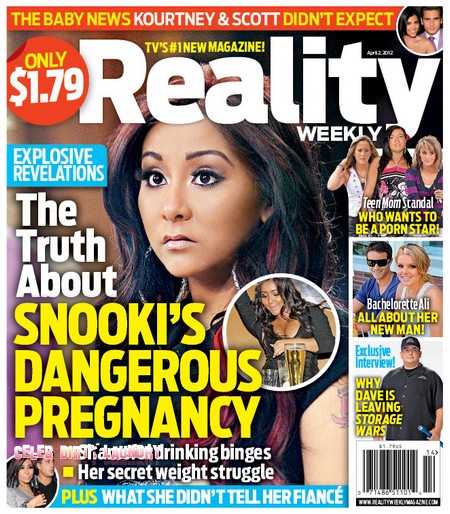 The April 2nd, 2012 issue of Reality Weekly features the cover story ‘The Truth About Snooki’s dangerous Pregnancy.’  Jersey Shore’s Snooki, 24, is expecting her first child with Jionni LaValle and has now agreed to marry him and the pair are very excited about their happy news.  Reality Weekly claims they have explosive revelations that she will not tell her fiance Jionni.

Reality Weekly has the scoop: “Snooki was not expecting to get pregnant at all, and before she found out she was partying like crazy,” a friend tells RW of her fears for her baby’s health. “She’s admitted that she was drinking a lot at New Year’s Eve in Las Vegas, but the truth is it’s way worse than she’s letting on. She was on a total binge over the holidays — it was one party after another, so now she can’t help but panic a little.”

Not only was she drinking and binging but the magazine also has details on her secret weight struggle.   Poor Snooki add to all the partying and binging her ex-boyfriend came out and said he’s wishing her the worst of luck in her pregnancy, adding that he hopes she suffers a miscarriage because he’s pretty sure that Jionni is not even the father of the baby.  We wish Snooki the best for a safe pregnancy and a healthy baby!

To find out all this and more pick up the current issue of Reality Weekly on sale now!