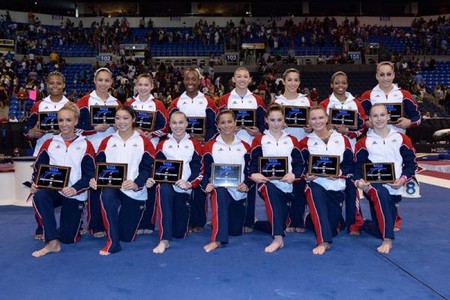 The 2012 Summer Olympics are right around the corner and here at Celeb Dirty Laundry we want to bring you a bit of insight into who these athletes that you’ll be cheering from your couch for in a few weeks really are. Today, let’s talk music – the thing that really motivates and inspires all gymnasts. A few of our US ladies took a minute to talk to NBC about what artists they are really into these days.

Gabrielle Douglas was on the team that claimed gold in Tokyo last year and has been nicknamed “The flying Squirrel” by Martha Karolyi because of the height she gets when releasing from the uneven bars.  Gabby loves to jam to Beyonce and Rihanna but melts at the thought of Adele’s music as well.

Aly Raisman is a three year member of the US National team.  Aly won a gold medal in team gymnastics along with a bronze medal in floor at the 2011 World Championships.  She says that Taylor Swift is her absolute role model, but also loves Adele.

Anna Li graduated from UCLA in 2010 before returning to elite gymnastics. She was an alternate for the 2011 World Team. Her parents competed for China in gymnastics at the 1984 Olympic Games.  She loves the sounds of Darius Rucker and Jason Aldean.

McKayla Maroney is a pretty popular name in the ladies gymnastics world.  She is the 2011 Vault World Champion and gets pumped up while listening to Nicki Minaj.

Jordyn Wieber is the reigning all-around world champion.  She will be ALL over these Olympic Games and you can bet that when they show her backstage warming up wearing her ipod, she’ll be listening to Justin Bieber!

Check out the video below to learn more about these Olympic hopefuls and a few more!