‘The Vampire Diaries’ First Look: Is There A Budding Romance Between Caroline And Klaus?

BY Nicholas Sanford on January 21, 2012 | Comments: one comment
Related : The Vampire Diaries 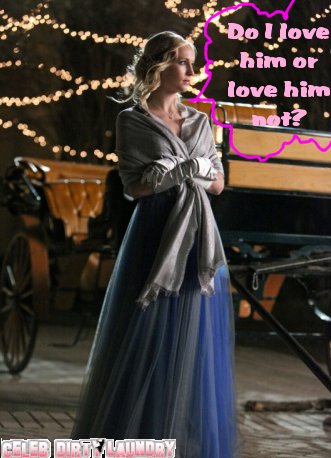 I know we’ve got some Vampire Diaries fans out there, so if you’re one of those people — like me — then you have to be interested in the possible new relationship budding between Klaus (Joseph Morgan) and Caroline (Candice Accola). Am I right? Thought so. After Klaus gave Caroline that bracelet on her eighteenth birthday, sparks definitely started flying . . . and it would be wrong to assume that their stories wouldn’t continue to intertwine. And, based off some recent images released by The CW, intertwine they will — at a fancy, grand ball no less!

As always, you can expect to see some Damon/Elena/Stefan love-triangle drama, but what we’re most excited to see is the interaction between Caroline and Klaus. Should be interesting, right? When E! asked Candice Accola what she was most excited for fans of the show to see, she immediately brought up “The Ball.”

“I’m really excited there’s an episode where there’s a ball. Everyone got to get all dressed up,” she says. “We took ball dancing lessons. It was really fun. I’m excited for people to see that episode for many more reasons besides the fact that we got to get dressed up, but I don’t want to give those reasons away. I’m just going to say because we got all dressed up, which is code for a lot of s–t goes down.”

I don’t know about you all, but we here at CDL like it when “s–t” goes down on our paranormal dramas. We sort of live for that kind of thing.

In one of the photos, we see Caroline wearing the bracelet Klaus gave her. Could she be harboring some secret, unexplainable feelings toward Klaus? Could it all have something to do with Caroline drinking Klaus’s blood — are they somehow linked now? It’ll be interesting to see how it all pans out, especially since Caroline has been so vocal about Klaus in the past.

The episode synopsis includes this: “Caroline discovers a side of Klaus no one would have suspected.”

If that’s not something to get your blood flowing then I don’t know what is.

The Vampire Diaries is taking a small break, but will return with all its fantastic supernatural drama on February 2nd. In the meantime, make sure to check out THE VAMPIRE DIARIES section on our site to get caught up! There you’ll find episode recaps, tons of photos, and — if you want ’em — spoilers.

Now, the topic of Elena and her romantic future is a whole different mess to be talked about. But let’s just say Stefan is really getting on my nerves and I think Elena should start exploring her other options (i.e. Damon).