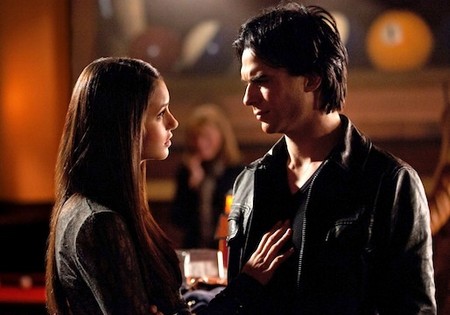 Last night was the mid-season premiere of The Vampire Diaries and we recapped it.  The show returned with a bang and my jaw dropped to the ground at the end of the show.  In our  wrap-up we have some observations of last night’s show and some questions.

A good percentage of tonight’s episode was about Klaus.  He wants his family back from Stefan and he is pretty much ready to do anything to get them.   Meanwhile Stefan is adamant he is not giving them back.  What is at issue is whether Stefan’s need for revenge on Klaus is greater than his loyalty and love for his former friends, Elena and his brother.

What dastardly tactic will Klaus use next to pressure Damon and Elena to give him what he wants – Stefan’s whereabouts or the location of his family’s coffins?

A fan favorite is leaving the show, Jeremy (Steven R. McQueen).  Jeremy tells Elena they need to leave the town that no one will make it out alive if they don’t leave.  After Jeremy has to cut Klaus’ hybrid Tony’s head off Elena agrees – she realizes that they are at war with Klaus and her brother will continue to be in grave danger.  Thus she has Damon compel Jeremy to leave town for Denver to visit friends.  So Jeremy is exiting, but will it be for good?  A source tells u he may come back in the future.

We met a new character, Dr. Fell (Torrey DeVitto).  She was treating Alaric when he landed in the hospital.  Will she be a possible love interest for Alaric?

Tyler has turned super creepy.   He is all into being a hybrid and appears to be blindly in love with his sire,  Klaus.  Did you notice how Tyler’s makeup has been altered to give him a waxen living-dead look?

Caroline was missing from the show but she will be returning next week to celebrate her 18th birthday.  You can read more about Caroline’s return next week here!

The Kiss- it finally happened between Damon and Elena.  They really teased us with this long awaited kiss.  Damon tells Elena he thought he would never have to feel guilty for what he wants, but since he learned that brother Stefan saved Klaus not as a betrayal but as the only way to save him he once again is feeling remorse over his desire for Elena.  Elena says Damon, questioning what it is he has to feel guilty about and he says ‘Brothers girl and all.’ He goes to walk away and then says, “No, if I am going to feel guilty, I am going to feel guilty for something I did.’ He embraces her and kisses her passionately and then says goodnight and leaves.’  After all the sexual tension between the two the kiss has been a long time coming.  What did you think of the kiss?  Do you prefer Damon and Elena together?

What did you think of last night’s show? Sound out in the comments below and let us know what you think about our questions!  If you dare to see a spoiler of next week’s episode called ‘Our Town’ go here!