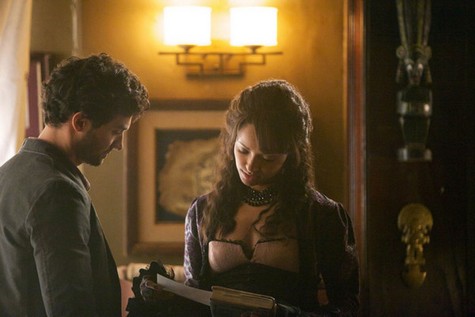 Tonight on the CW my favorite show THE VAMPIRE DIARIES airs with a whole new episode called “The Five.” On tonight’s show a frat party and a flashback to 12th century Italy – Damon goes with Elena and Bonnie to visit Whitmore College, where Professor Shane (guest star David Alpay, “The Borgias”) is taking over the Occult Studies classes formerly taught by Bonnie’s grandmother.  Did you see last week’s premiere episode?  We did and we recapped it here for you.

On last week’s show Connor continued his search to uncover the secrets of Mystic Falls and tried to convince Jeremy to work with him. With Dr. Fell’s help, Damon and Klaus questioned Connor, but the confrontation took a lethal turn. Trying to keep her new life as normal as possible, Elena was determined to continue her senior year at Mystic Falls High with support from Matt and Caroline. Rebekah’s arrival at school made it difficult for Elena to control her anger, but she learned that confronting Rebekah can be extremely dangerous. Later, Rebekah realized how alone she is, and reached out to April.

On tonight’s show Damon goes with Elena and Bonnie  to visit Whitmore College, where Professor Shane is taking over the Occult Studies classes formerly taught by Bonnie’s grandmother.  At a fraternity costume party, Damon takes advantage of the wild scene to give Elena a lesson in choosing a victim. Rebekah’s (Claire Holt) attempt to buy Matt’s (Zach Roerig) forgiveness falls flat, but she is intrigued by unexpected news from Klaus (Joseph Morgan). When Stefan (Paul Wesley) questions Klaus about Connor’s (guest star Todd Williams) motives, Klaus reveals a long-ago encounter with a powerful group of vampire hunters, but it’s Rebekah who delivers the information that stuns Stefan.

The Vampire Diaries Season 4 episode 4 ‘The Five’ airs at 8PM tonight on the CW and we will be live blogging it will all the up-to-the-minutes. So come back to this spot and spend the evening with us enjoying the show! Make sure to refresh often to get the most current update!

Tonight’s recap:  Tonight’s recap opens in 1110 A.D. with witches chanting.  There is a warrior with Tattoos like Connor’s and he has a sword the witches have put a spell on.  The Sword has different symbols on it.

In current time Stefan is looking for mystic items that Damon has taken from the Vampire Hunters, Damon, trailer.  Damon and Stefan are using for a handbook so they can find out what ‘The Five’ are.

Damon gets a call from Sheriff Forbes and Damon says it is disturbing because the Sheriff did not find any remains at the site where the fire was.  It means Connor is not dead.

Damon tells Stefan he is giving Elena lesson today on how to be a vampire.  Stefan goes to see Elena and she tells him that she cannot live from animal blood it must be part of being a doppelganger.  Elena tells Stefan she wishes it could be him to teach her to feed but she knows that Stefan becomes a ripper around blood.  Elena tells Stefan her and Damon are going with Bonnie to Whitmore College.

Rebekah comes into Mystic Grill and tries to give Matt the keys to a new truck, he refuses.  Klaus sees her and tells her she is trying to hard.  Rebekah wants to know what he is doing there he was supposed to leave.

Klaus tells her The Brotherhood of the Five still exists.  Rebekah is surprised but tells Klaus she does not care.

Klaus comes in his house and he has Connor tied up.  Stefan walks in and he wants to know what Klaus got out of him.  Klaus claims nothing.  Stefan wants to talk Klaus alone.

Rebekah fell in love with one of the FIVE.  Klaus is willing to share what he knows with Stefan as long as Stefan can get Rebekah over to his house.

Klaus tells Stefan the hunter holds the answers to all Stefan’s prayers.

Matt comes over to see April and finds she is with Rebekah.  Matt is surprised Rebekah has a friend.  Stefan comes over and tells April she will not remember anything.

Damon and Elena are stalking a girl and Damon is teaching her how to approach a girl.  Elena goes to the girl and compels tells her not to scream – then she sees her phone with a little girl and she cannot do it.  She tells the girl to leave.  Damon wants to know why she still cares.

Bonnie spoke to the professor and he found some of her grandmother’s things and is going to give it to her later.  Damon, Elena and Bonnie are going to a frat party that night.

Rebekah comes over to Elena’s and he asks her to eat.  Rebekah, Stefan and Klaus sit down. Rebekah wants an apology from Klaus – he finally gives her one.

Back in 1110 A.D. we get to meet Alexander, Rebekah’s old love.  Alexander tells Klaus that the five are banded together for the destruction of vampires.  The Five have a weapon that will destroy all vampires.  In order to find the weapon they have to find the puzzle that has disappeared.  The tattoo is a map, but no one can see it but Jeremy.  Klaus brings Jeremy in who does not want to help.

Elena, Bonnie and Damon show up at the Murder House.  Damon is dressed as Jack the Ripper and Bonnie and Elena as his girls.  They see Professor Shane the teacher show was lecturing about witches, Bonnie goes to talk to him.

Connor asks Jeremy why he set him up at the hospital.  Jeremy lets Connor know he tried to hurt people that he loves.  Connor cannot understand why Jeremy can see the tattoo if he is a vampire sympathizer.  Connor tells Jeremy that people who see the tattoo become vampire hunters.

Rebekah loved a vampire hunter and then found out he had a weapon that could kill original vampires.   Although Rebekah loved Alexander, he stabbed Rebekah and the rest of her family.  The only reason they survived was because Klaus/Nick could not be killed by the dagger and he killed Alexander.

However, Alexander told Rebekah that the sword and the tattoo are a map that leads to a cure for Vampires.  That is why the map is so important.

When Klaus killed all the Vampire Hunters all the tattoos disappeared. This is the first Vampire Hunter that Klaus has met in 900 years.

Rebekah realizes that Klaus wants the cure for Elena so he can cure her and have her make more hybrids.

Bonnie goes to Professor  Shane to see all his witch stuff.  Shane asks Bonnie if she still practices and Bonnie tells him no, she did something wrong and that was the consequence.  Shane offers to show her another ay she can practice.

Elena is having a great old time biting everyone at the party, she is covered with blood and dancing.  She is high on blood and comes over to Damon to dance.  They are both covered with blood.  Bonnie walks in and sees them, she is shocked…  It brings Elena back to reality and she tells Bonnie she has to get out.

Klaus comes in and Jeremy is drawing, Klaus is not happy – the tattoo does not look the way he thought.  Jeremy tells Klaus that every time Connor kills a vampire the tattoo grows.

Klaus tells one of his hybrids to take Jeremy home.

Elena is disgusted with herself and she lets Bonnie know she should have come with Stefan.  Bonnie tells Damon he was supposed to teach Elena, not to let her go out of control.  Damon tells her off – he claims he was teaching Elena how to make it fun and not kill someone.

Rebekah comes to see Stefan and she apologizes – Klaus makes her crazy.  She tells Stefan she wanted a cure back then.  Rebekah asks if he wants it for Elena.  Stefan agrees he does, he would do anything to save her.  He feels when Elena turns off her humanity, he will lose her forever.

Then Rebekah realizes that that is exactly what Stefan wanted to know for Klaus.

Klaus walks in with the dagger and the white ash and he stabs Rebekah.

Klaus tells Stefan he has a plane waiting and Stefan must make Jeremy forget everything and put Rebekah where no one can find her.  He threatens Stefan and tells him no one can know about this.  It is a secret between Klaus and Stefan.

Damon takes Elena home, she apologizes to Damon, and things got out of control.  Elena believes what Damon told her but she does not want to be like him.

Stefan comes out and Elena asks what he is doing there, he tells Elena he had a few things he had to discuss with Jeremy.  Damon asks Stefan if there is anything new with the Vampire hunter.  Stefan tells him no.

Stefan asks Elena how it went; she tells him she learned how to feed without killing anyone.  Elena does not know how she is going to survive.  Stefan tells her to hang on.

The hybrid comes in to see Connor and Connor has gotten lose and he rips the hybrids head off.  It makes his tattoo grow more.