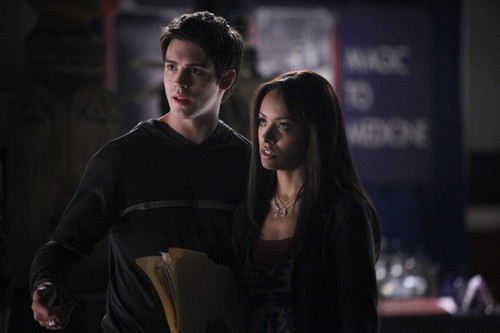 Next week’s episode of The Vampire Diaries is going to be great and, as always, you can count on us to provide you with the juiciest, bloodiest, most magical previews and teasers out there. Continue reading to sink your fangs into next week’s episode, and don’t forget to watch the promo video we have for you below as well.

Spoiler alert: If you’re one of those people who doesn’t like spoilers, stop reading now! We have some juicy spoilers for you about the season 4 episode 6 of CW’s “The Vampires Diary.”

As you just read above, the drama continues with Elena as she copes with being a newly turned vampire. And it’s not proving to be sunshine and rainbows, folks. The transition is hard for her, and now she’ll be faced with yet another terrifying obstacle: hallucinations and visions of the past. The major question surrounding this upcoming episode will be what will Elena do as a result of these visions — what deadly, fatal mistake will she make? Elena has already made mistakes with her fangs, like almost completely eating Matt for example, so it’s no surprise that Julie Plec and the writers are going to continue making Elena’s life a living hell.

In this upcoming episode we will also get to know more about Professor Shane, and his somewhat mysterious connection to the magical world. He claims not to be a practitioner, but he knows many things, and as we’ll encounter during this episode, he tells Bonnie about a strange, ancient story involving incredible witchcraft. Sure, we want this guy to turn out awesome for Bonnie, but there’s definitely something fishy about the professor — and all we can say is that Bonnie better watch her witchy self. And the professor’s motivations will undoubtedly be further questions after Matt divulges a rather disturbing secret about his character . . . . what could it be?

The Vampire Diaries Season 4, Episode 6 “We All Go A Little Mad Sometimes” airs on the CW on November 15th, 2012. Check out the preview video and some photos from episode 6 and let us know in the comments below what you think!