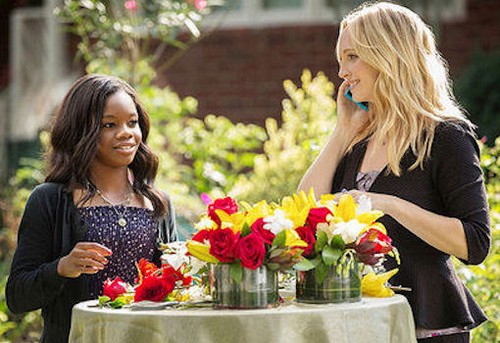 Tonight’s VAMPIRE’S DIARIES episode, as always was juicy, bloody and heart wrenching.  Connor spent a good part of the episode taunting Elena and trying to make her kill herself.  Apparently if you kill a vampire hunter that is stalking  you, you are the last vampire they kill.  Because Connor is dead he cannot kill Elena, so he taunted her and torment you until they convince you to kill yourself.  So Elena was having many hallucinations of a dead Connor and Katherine and they tried to convince her to kill herself.  Add to all of this at the end of tonight’s episode we found out some creepy news about Atticus Shane.  I cannot wait to see what happens on the next episode, but sadly we are having a one week hiatus because of Thanksgiving.  While you wait the long 2 week, we have gotten our hands on a  sneak peek video and some spoilers to wet your appetite and sing your fangs into  for next week’s episode 7 titled “My Brother’s Keeper.”

On tonight’s show  the drama continued with Elena as she copes with being a newly turned vampire. And it’s not proving to be sunshine and rainbows, folks, not at all! The transition was very hard for her, and she was faced with yet another terrifying obstacle: hallucinations and visions of the past. The major question surrounding tonight’s episode was what will Elena do as a result of these visions — what deadly, fatal mistake will she make? Elena has already made mistakes with her fangs, like almost completely eating Matt for example, so it’s no surprise that Julie Plec and the writers are going to continue making Elena’s life a living hell.  Did you see tonight’s episode?  We did and we recapped it here for you!

Spoiler alert: If you’re one of those people who doesn’t like spoilers, stop reading now! We have some juicy spoilers for you about the season 4 episode 7 of CW’s “The Vampires Diary.”

Official CW synopsis of next week’s episode: THE MISS MYSTIC FALLS PAGEANT — Caroline (Candice Accola) does her best to be there for Stefan (Paul Wesley) and Elena (Nina Dobrev) in a tough time. Damon (Ian Somerhalder) tries to convince Stefan to help him uncover Prof. Shane’s (guest star David Alpay) motives, but Stefan is intent on carrying out a different plan with Klaus (Joseph Morgan). At the annual Miss Mystic Falls Pageant, Elena and Caroline give April (guest star Grace Phipps) advice on which dress to wear, while Tyler (Michael Trevino) and Hayley (guest star Phoebe Tonkin) work together on a secret project, and Damon confronts Prof. Shane with his suspicions. Alarmed by the vivid nightmares he’s having, Jeremy (Steven R. McQueen) turns to Matt (Zach Roerig) for help, but the situation escalates sooner than anyone expected. Olympic Gold Medalist Gabrielle Douglas also makes an appearance.

On next week’s show the cat is out of the bag and Stephen lets Damon know that Elena and he have broken up.  Damon’s reaction, “Oh!”  But, Stephen is not buying Damon’s surprise and tells in in no uncertain terms that he does not want to pretend that Damon does not think this is the best day of his entire life.  Ever since Elenawas turned into a vampire, her feelings for Damon are more intense.  Stephen cannot deal with that.   Elena now has to meet with Damon and tell him how she is feeling.  The question that should be on Damon’s mind is, if they find a cure for Elena will her feelings change again?  What do you think of Elena and Damon together?  I am all for it :-)  We will have to wait for two weeks to see how this all plays out.

The Vampire Diaries Season 4, Episode 7 “My Brother’s Keeper” airs on the CW on November 29th, 2012.   Check out the preview video  from episode 7 and let us know in the comments below what you think!