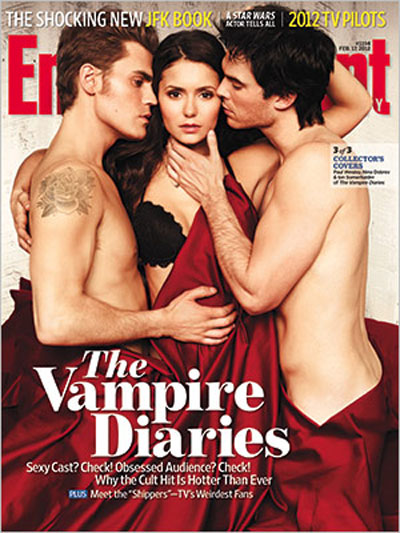 It’s a Vampire Diaries bedroom sandwich on this week’s cover of Entertainment Weekly!

Paul Wesley and Ian Somerhalder, the male stars of the popular vampire drama on the CW, seductively posed with their co-star Nina Dobrev in just underwear and strategically placed bedroom sheets for the magazine’s new issue that will be on newstands on Friday.

The two collectable covers includes a sexy Elena-Stefan moment, plus for the Delena fans, a a sexy photo of just Elena and Damon, while the main cover features all three cast members, looking like they are about to embark on a menage-a-trois!

Inside the magazine, the actors discuss their on-screen love triangle, as well as their off-screen relationships.

“The rumor mills were ‘Is Nina with Ian or is Nina with Paul?’ There was a lot of speculation,” said Nina.

Added Ian, “Nothing has been confirmed yet.“

Considering that Nina and Ian were rumored to be getting engaged at one point, we’re guessing that she’s Team Damon in real life.