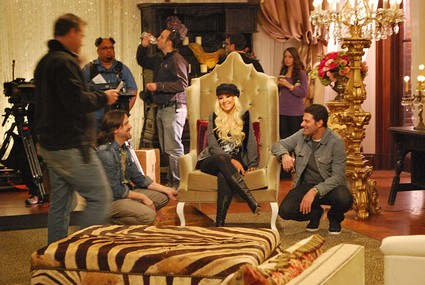 The blind auditions are over and it is time for the battle rounds to being on an all new episode of The Voice tonight.  If you missed any of the blind auditions you can read our official recaps here!  In the battle rounds, each coach selects two members of their team to “battle” against one another.  The two team members must learn the same song (together) and perform it as a duet on stage.

Unlike American Idol we will know who is eliminated tonight.  After the performances each of the judges: Christina, Adam, Cee-Lo and Blake mad the decision who will be eliminated.  I am really looking forward to the battle round and seeing who the judges decided to pair together!   How about you?

Tonight’s Recap:  Tonight the coaches and their teams enter the battle round.  Each judge has 12 members – who are going to be going head to head against their team mates.

Team Adam 1st pairing has assembled his team of 12 and after the battle round there will be six left.  Adam’s first pairing is Tony Lucca and Chris Cauley will be singing Beautiful Day by U2.

Adam brings Alanis Morissette to coach Tony.  Adam feels like Tony is working too hard and he is straining his voice.  Tony does not feel the high notes are his strong point.  At the end he feels like he gets a lot of good advice.

To help Chris prepare for battle Adam brings in Alan Thicke.  Alan thinks his voice is going out but his body language is coming in.  Chris has to learn how to perform and not just depend on his voice.

It is the night of the first battle and Adam will have to pick either Tony or Chris to stay.  It is do or die.

Judges Decision – Blake said he expected Tony to dominate the stage. But Blake thinks Chris was pretty solid and he goes with Chris. Christina thought they were both very good, but she is pulling for Tony. Christina picks Tony. Cee-Lo felt that Tony articulated more clearly so he chooses Tony. Adam felt they both did an amazing job. They both blew him away and it is very close. Adam chooses Tony to move ahead to the live show.

Team Blake 1st pairing is next for this battle he is pairing Adley Stump vs Raelynn singing Freefalling by Tom Petty – he chose them because they are both completely different.

Blake brought in his wife Miranda Lambert to coach Raelynn.  Miranda is one of her inspirations. It was her dream come true to meet Miranda.

Judges Decision – Christina thinks they were both on pitch.  But Christina thinks Adley was the stronger of the two.  Cee-Lo thinks Raelynn is adorable, but he thinks Adley has more experience and he goes with Adley.  Adam think felt they both did a good job.  Adam would go with Raelynn because she is more unique.  Blake’s thoughts – as a country artist they tell stories, he already knows they are both good singers.  He felt they both did a good job, one did a better job.  The winner of the battle is Raelynn and she moves ahead to the live show..

Team Christina 1st pairing – for her first battle she is pairing Chris Mann and Monique Benabou and they will sing The Power Of Love by Celine Dion.  Chris is talking Monique very seriously her voice has a lot of power.

Christina surprises Chris with Lionel Richie to help. Lionel tell Chris because he is trained he is psyching himself out. He needs to reach into his gut and find the hunger.  Monique gets to work with Jewel.

Judges Decision: Cee-Lo thought they both sounded wonderful. Cee-Lo picks Chris. Adam thought in the beginning he said Chris but then he was not so sure, but he will stick with Chris as his choice. Blake chooses Monique. Christina loved them both, she felt Monique stepped up to the plate and Chris was wonderful. The winner for Christina is Chris and he moves ahead to the live show.

Team Cee-Lo 1st pairing – for his first battle pairing he chooses Cheesa and Angie Johnson and they will sing Total Eclipse of The Heart by Bonnie Tyler.  After hearing their battle pairing the two have a chance to break down the song with Cee-Lo.  Angie felt Cheesa was showing off but Angie is not worried.  The next day Cee-Lo brought in Baby Face to help monitor Chessa.  Angie gets an opportunity to work with Ne-Yo.

Cee Lo Cheesa and Angie Johnson and they will sing Total Eclipse of The Heart by Bonnie Tyler. After hearing their battle pairing the two have a chance to break down the song with Cee-Lo. Angie felt Cheesa was showing off but Angie is not worried. The next day Cee-Lo brought in Baby Face to help monitor Cheesa. Angie gets an opportunity to work with Ne-Yo.

Judges Decision:  Adam thought it started shaky but then they both were really powerful.  He picks Cheesa.  Blake thought they both had great moments, but he chooses Angie.  Christina thought it was a great match.  She felt Cheesa had a great voice, and Angie was great and hit a lot of good notes.  Christina chooses Angie.  Cee-Lo feels like a proud father – he felt like it was a real battle. The winner of the battle is Cheesa and she moves ahead to the live show.

Team Blake 2nd pairing – for his second battle pairing he chooses Jordis Unga and Brian Fuente singing Ironic by Alanis Morissette – they both meet with Blake to come up with a game plan.  Bryan thinks he is the underdog because the song was made for a female.

Judges Decision: Christina thought there were pitchy moments – she picks Jordis. Cee-Lo preferred Brian because he was aggressive. Adam had a great time it is tough to choose but he would go with Jodis. Blake wanted a rock singer for his team and Adam is a definition of rock for him. He thought there were some pitchy things that did not work, he did not think they both did the best they could do.  The winner of the battle is Joris and she moves ahead to the live show.

Team Christina 2nd pairing – the next battle she is pairing Anthony Evans and Jesse Campbell singing “If I aint got you” by Alicia Keys.  Jesse gets to work with Lionel Richie and Anthony with Jewel.

I don’t know how she is going to choose between them because they are both stars!  A heavy weight battle of epic proportion.

Cee-Lo was blown away both impressive performances.  Adam thinks the level of talent is insane – he does not want to be Christina.  Adam picks Jesse.  Blake thought it was so good it was ridiculous.  Blake would pick Jesse.  Christina is so upset that he has to make the decision they are both gems.  The winner of the battle is Jesse and he moves ahead to the live show.

That is a wrap for tonight!