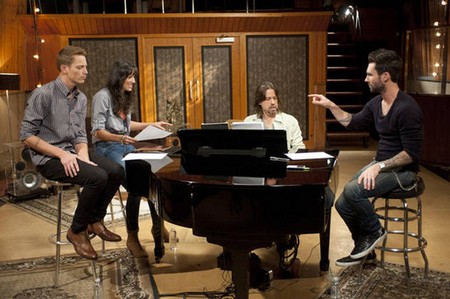 Tonight The Voice returns with The Final Battles of Season 2.  The final artists sing their elimination duets to see who moves on to the live rounds.  Stand by as we live blog the show with all the up-to-the-minute details.

Live shows begin next week.  Once the live shows begin, the The Voice will expand to two nights a week. The live show performances will be two hours long and the results show will be one hour long on Tuesday nights.

Meanwhile Dancing with the Stars recorded its lowest ever launch last Monday night but it still sent reality show rival The Voice on NBC crashing down to a season low.  Will DWTS continue to crush The Voice? DWTS is still a force to be reckoned with and only time will tell.  Which show do you prefer DWTS or The Voice?

Tonight’s RECAP: Here we go! Cee Lo Green’s mean team goes first – he set James vs. Wade singing Cyndi Lauper’s ‘True Colors.’ They practice with Cee Lo. James gets Ne-Yo as his mentor and Ne-Yo says to get some confidence quickly in order to survive.  Wade has Babyface as his mentor and he tells him he has to move people emotionally with this song because it’s that kind of song. Cee Lo believes in Wade.

Final rehearsal and it seems James has really improved. Cee Lo weeps and says he is humbled by this. He says ‘live it love it!’ Wade and James both start off so amazingly – they sing so well together that it’s a shame that Cee Lo is going to have to send one of them home. Adam speaks first and picks James – Blake also picks James. Christina also chooses James. Cee Lo naturally says it’s a difficult choice but he says James blew him away. Cee Lo was surprised that Wade appeared nervous today.  Cee Lo picks James! Wade is out!

Adam’s team follows Cee Lo’s – Adam pairs up Mathai with Nicolle to sing “Love Song” by Sarah Bareilles. Adam has an issue with Nicolle at rehearsal.

Nicolle has Robin Thicke as mentor. He advises her to be more physical and more confident. Connecting with the crowd will be key for her – Nicolle must find a way.  Mathai gets Alanis Morissette!! as her mentor. Mathai has to hold her notes longer. Mathai and Nicolle have one more rehearsal. Adam pulls out the piano and Nicolle can’t focus…

Battle night – Nicolle starts off but not too great – Mathai joins she just dominates. It looks like Mathai is going to take this one.
Blake discusses breathing and Mathai gets his nod. Christina says hands down, no brainer Mathai is it. Cee Lo wasn’t moved much but also chose Mathai.  Adam complains about both singers – the rehearsal was better.  Adam picks Mathai… of course.

Christina’s team of Moses versus The Line to perform ‘Satisfaction’ by… The Rolling Stones – and if you don’t know that then it is time to throw out your television and buy a radio!  Lionel Richie mentors Moses and Jewel mentors The Line – she says they sound like a wedding band…LOL! Lionel is none too kind to Moses either.  Last minute rehearsal and Christina has a last chance to get them to look like they are having fun. Battle time and Moses and The Line both want it!

Hip Hop Vs. Country here we come. It’s a little strange but they are pulling it off not too bad. Adam, Cee Lo and the crowd are into the performance and Cee Lo says it was great and he picks Moses. Adam goes with The Line.  Blake too – Blake hold The Line… But Christina chooses Moses!

Adam’s team is up again with Orlando vs. Karla singing ‘Rich Girl’ by Hall and Oates. But during rehearsal Adam deems the song not right for them and changes it to ‘Easy Like Sunday Morning’ by Lionel Richie… what a coincidence!  Alanis mentors Karla and deal with her insecurity – good luck! Robin assists Orlando – talks about projecting his vowels.  Battle Night will determine Adam’s last team member.

Close call here – Blake chooses Orlando but Christina goes for Karla. Cee Lo also goes for Orlando but the boss – Adam, chooses Karla Davis and his team of 6 is complete.

Blake now needs to whittle down his team and it’s Naia Kete versus Jordan singing ‘I’m Yours’ by Jason Mraz.  Miranda Lambert mentors Jordan while Kelly Clarkson helps Naia and she is really impressed.  They are ready to rumble and Naia is out in front but Jordan did well too.

Christina and Cee Lo picks Naia as does Adam… and so does the boss man Blake. Bye bye Jordan, hello Naia. Blake’s team is all set now.

Cee Lo up last to complete his team – with his pair Justin Hopkins Vs. Tony Vincent – The song is “Faithfully” by Journey.  Babyface helps Tony and Ne Yo has Justin. Cee Lo cries during rehearsals…  Adam and Blake pick Justin but Christina and most importantly, Cee Lo, pick Tony.

So that is it – all teams are complete – battle rounds are done – see you next week!