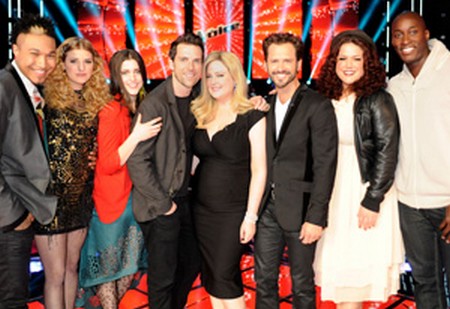 Tonight The Voice returns with ‘The Semifinals.’  On last Tuesday’s Elimination show, America and Adam and CeeLo made their final hard choices on who should be in the semifinals. If you missed last week’s elimination show or any of The Voice episodes you can read all our  full and detailed recap here.

On tonight’s show the top eight finalists on Season 2 of The Voice are ready to sing for their lives and compete for your votes.  The eight Semifinalists will each perform one song in addition to a group performance.

The teams will combine for two group numbers: Teams Adam and Cee Lo Green will come together to sing “All These Things I’ve Done” by The Killers, while Teams Blake and Christina join together on Lady Gaga’s “The Edge of Glory.”

Coach Blake Shelton, ACM & CMA Male Vocalist of the Year, will take the stage in the world television premiere off his new single, “Over,” off his album, Red River Blue.

The Finalists will be revealed on THE VOICE Elimination Show, Tuesday, May 1 (9-10 p.m., ET) as only one artist per team will advance to represent their coach in the Finals, narrowing the field down to four. The artist on each team with the highest score based on a combined percentage of viewer votes and coach’s score from the previous night’s Performance Show will move on for a chance to be crowned “The Voice.”

Blake: says I actually don’t know that song, but it’s probably the version I would like.

Christina:  says if it doesn’t work out, you and Adam can start a Britney cover band.

Adam:  says it was perfect and Tony killed it.

Team Blake with Erin Willett singing “Without You” by David Guetta feat. Usher

Christina: thinks it is unique – that is polite…

Cee Lo: says he is enjoying himself.

Blake: says he would give anything to have a tenth of her talent.

Chris is so far above the rest in this competition – it is no contest.  He is great – and whether or not classical singing is marketable or not is irrelevant.  Just think of the crap that sells by the millions… and I won’t name names to protect the guilty.

Cee Lo: at least can appreciate it.

Christina:  says she feels the heavens open up and she gives him a hug – no One Direction here!

Cee Lo: says that Jamar’s is a “success story.”  Where does he come up with this stuff?

Dedicates to his family – a bit too soft for him.

Christina: says he murdered the song – but in a good way.

Adam: says Jermaine has graduated from being a background singer.

Blake: thinks Jermaine is the man to beat.

Christina: tells Adam that Katrina is a star. Like he can’t tell?

Cee Lo: says Katrina made the much covered her song – quite an achievement.

Adam: claims she made it her own.

Blake Shelton does his special performance of “Over” – what a bully pulpit this show is for the stars.

Lindsey with guitar is self-possessed and does a good job.

Cee Lo: jokes around about skinny versus big love – ha ha – says she was good.

Blake: thinks it was wise of Christina to set Lindsey with her comfortable style

Christina: complements Lindsey and hugs her.

Juliet starts off strong and true – BEST performance of the night!!!

Adam: says this is something special.

Christina: brags about when she herself did the song – what a fame hog – Christina is too much. says she

Cee Lo: says she killed it – murdered it – he should be pleased.

Tune in tomorrow when we bring you the LIVE RESULTS at 8pm EST!