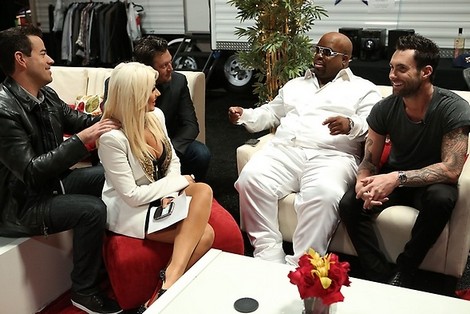 The Voice Season 3 premieres tonight in the first of a three-part premiere, the coaches reunite to find America’s best new singer.  We can expect major changes at The Voice for season 3, including more chair turning fun. Marc Burnett, executive producer said, “That’s what the big demand we got from the audience.”  The blind auditions are also now 12 hours.

This season we will see the usual lineup of coaches – Adam Levine, Christina Aguilera, Cee Lo Green, and Blake Shelton. During the battle rounds this season we will see Mary J. Blige, Michael Buble, Rob Thomas, and Billie Joe Armstrong as advisers.  Carson Daly returns as the host and Christina Milian as Social Media Correspondant.

There is a twist this season – coaches can use a rule called the Steal, which allows them to snag up to two contestants from opposing teams.

As usual the show’s innovative format features three stages of competition: the blind audition, a battle phase, and finally, the live performance shows.

Adam Levine claims we will see no more fighting between him and Christina Aguilera in season 3, why don’t I believe that LOL?  He claims The Voice this season is a love fest and they are all just getting along.

I wonder how long that is going to hold true.  Just wait until Christina uses the Steal and takes one or two of Adam’s singers and I am willing to bet the love fest ends there!

Tonight’s premiere is going to be and exciting one, which you won’t want to miss. So be sure to tune in for our live coverage of NBC’s The Voice – tonight at 8PM EST!  While you wait for our recap, hit the comments and let us know how excited you are about the new season of The Voice.  While you wait for the recap watch a premiere sneak peek below!

Tonight’s recap: Night 1 of the Voice starts right now!  This season the teams will be bigger and a new twist will change the game forever.  This will be the best talent ever and the judges will do anything to get the right singer.  For some dreams will come true but for others……

The Blind auditions start now – the wait is over the coaches are more fired up than ever.  The show opens with the judges singing the Rolling Stones ‘Start It Up!’ What a way to start season 3.

Terry Mcdermott a Scottish Rocker singing Baba O‘Riley.  Blake presses first, then Adam and then Cee Lo.  Adam tells him he has a clean pristine voice and a real rock and roll voice.  Christine tells him he has a great radio quality and Cee Lo thinks he is the real thing. Blake tells him he can win it if he gets up and talks.  Terry picks Blake Shelton!  Terry feels Blake’s mentoring could do a lot for him.

De’Borah from Chicago she use to perform in church, she is a gospel singer.  She is singing Hey Soul Sister.  Christina Aguilera and Cee Lo Green pressed their buttons.  Cee Lo loves her swag and Christina had a lot of fun listening to her.  Cee Lo thinks she has so much cool and so much quirk and he is the best for her he tells her.  Christina thinks that she has a voice that she can do a lot with it.  De’Borah chooses Christina Aguilera.  She has been a Christina fan for a long time and that is why she chose Christina.

Gracia Harrison a country singer who yodels.  Gracia is singing I wanna Be A Cowboy’s Sweetheart.  The first to press his button is Adam Levine, followed closely by Adam and then Cee Lo.  Christina tells her it was awesome, she asks Blake if he can yodel.  Adam tells her she is the best country singer that has ever been on The Voice.  Adam gushes and tells her he wants her so much.  Cee Lo tells her she is an absolute original and she is certainly the best country singer they have ever had.  Blake tells her that it makes sense that she go with him and not the other judges.  Gracia picks Blake!  Adam is devastated.

Garrett Gardner  is 16-years-old and the next up and he is singing ‘Have You Ever Seen The Rain.’ No one pressed their buttons.  Blake tells him he has a really, unique sound and tone but he has a lack of control changing from one note to the other.  It will come with time and experience.

Devon Deloera and she is a small town West Texas girl and she is singing Ain’t no Other Man a Christina Aguilera song.    Christina is the first one to press her button, followed by Adam and Blake.  Christina tells her she really, really likes her and wants to be her coach.  She makes her pitch, she loved her.  Adam thinks it was a courageous choice and a good song choice.  Blake says that Devon made him press her button.  Devon chooses Christina Aguilera.

Bryan Keith his father is a singer with the Spanish Harlem Quartet and has won two Grammys.  He is singing ‘It Will Rain’.  Blake presses his button almost immediately, followed by Christina and then Cee Lo, lastly Adam presses.  The Four judges want him.  Adam tells him it is so difficult to find someone with a voice like him, he is special.  Cee Lo thinks his voice has all the qualities that he loves.  Cee Lo tells him he has the range and the rasp and he loves him.  Christina thinks he has a raw quality and a raw voice and she wants him on her team.  Blake knows he is the real deal because he sounds like the same guy when he starts singing to the end.  Adam tells him he is dying to have him on his team and will be upset if he does not choose him.  Bryan chooses Adam Levine.  Adam feels he got the win of the day!

Daniel Rosa who auditioned last season singing  Somebody That I Use To Know.  Cee Lo pushes the button first followed by Blake.  Daniel is so happy because this time they put him through.  The judges recognize him and Adam runs up and hugs him.  Cee Lo tells him he sounds cool.  Adam says he is he story of how not to give up.  Blake thinks that perhaps since last year he may have learned something.  Daniel wants Cee Lo to be his coach.  Daniel did not think it was going to happen but he is thrilled.

Anita Antoinette singing Bob Marley’s ‘No Women, No Cry.’  Anita just graduated from Berkley’s Music school.  None of the judges turned around.  Blake tells her she is a great singer and has a great voice.  Although, Adam did not feel the spirit of the song did not come through in the song.  She asks if she can sing the song acapella and the judges agree.  The ask her to come back and try again next season.

Joe Kirkland from Fort Worth, Texas singing ‘Gives You hell’  Adam presses almost immediately followed by Blake.  Adam think he has really great tone and he has never really had anyone like him.  Blake thinks he has star quality and he wears vests just like Joe has on.  Joe chooses Adam Levine as his coach.

Jessica Sharpe from Greensboro, North Carolina singing Son Of A Preacher Man.  None of the judges turn their chair.  Christina tells her she sang her heart out but the magical moment just did not happen tonight.  Blake asks her to come back for Season 4 and try again.

Trevin Hunte who lives in Jamaica, Queens, NY singing Listen.  Christina hits her button right away, next Blake and then Cee Lo.  Blake stands up and asks Adam what is wrong with him and why he did not press his button.  The judges give him a standing ovation.  Cee Lo asks him what planet does he come from.  They find out he is just 18.  Christina begs him to pick her because she hit her button first.  Blake tells him he has so much talent he blew his mind.  Cee Lo tells him he could be the person who wins this thing.  Trevin chooses Cee Lo.  Cee Lo thinks he is a protege and he can win with him.