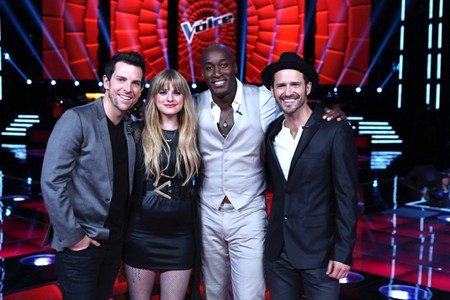 On Monday, the four remaining contestants will perform one song, then they will join their coaches to perform another during the live broadcast.

On Tuesday’s season finale, the final contestants will each collaborate with some of their fellow season two, previously voted-out, contestants who return for a special performance.

There are plenty of musical guests, surely something for everyone; Justin Beiber, Flo Rida, lady Antebellum and Daryl Hall & John Oates. In a finale surprise, the four coaches will thrill fans when they join together on stage for a group number to end season 2.

Coach, Blake Shelton visited Jay Leno and gave his thoughts about the final four: he thinks that Juliet Simms is a “thorn in his side” because she is a front runner, when it comes to Tony he doesn’t want him to win only because he doesn’t want Team Adam to win again, Chris is amazing and Jermaine is his guy, so he is predicting that he is going to win. You can check out the interview, in the video below.

These contestants have made it through the blind auditions, the battle phase and now on to the live performance to see who will win The Voice 2 and the grand prize of a recording contract.

Who do you think should be crowned The Voice 2 winner, will they be able to follow in the footsteps of last year’s winner, Javier Colon?  Hit the comments below and let us know your thoughts!