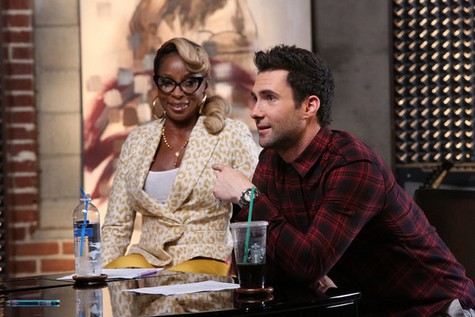 Tonight on NBC at 8PM The Voice returns with a whole new episode as the competition moves on to the Battle Round Part 2. On tonight’s show the artists return to the stage for face-to-face elimination duets.  If you missed last night’s show you can read our full and detailed recap here!

Finally after a slow and boring Blind Audition round we have finally moved on to something more interesting, the Battle Round.  On last night’s show the coach and mentor combos for the  night were:  Adam Levine with mentor Mary J Blige, Blake Shelton with mentor Michael Buble, Cee Lo Green with mentor Rob Thomas(Matchbox 20) and Christina Aguilera with mentor Billie Joe Armstrong (Greenday).

In a twist, each artist that loses a battle is up for a steal. Each coach can steal up to two times. If two coaches want a steal, the power switches back to the artist who then selects whose team they’ll move to.  The other coaches agree last night the steals are terrific additions to the show’s format. They’ll all be back the next night to see their artists square off once again.

On tonight’s show the battle round continues as the artists sing duet battles, the coaches must decide whom to save, steal or send home.  The Voice promises even more talent tonight and more cutthroat steals that we cannot wait to see.  What do you think of “The Steal”?  Hit the comments and let us know your thoughts?

Tonight’s Battle Round Part 2 is going to be an exciting one, which you won’t want to miss. So be sure to tune in for our live coverage of NBC’s The Voice – tonight at 8PM EST!  While you wait for our recap, hit the comments and let us know how what you thought of last week’s premiere week of The Voice?

Tonight’s recap:  It’s the Battle Rounds and the first two singers to face off tonight are Cody Belew and Domo – Team Cee Lo Green, they are mentored by Rob Thomas and will be singing “Telephone” by Lady Gaga. Rob thinks Domo will have to work harder because she is a dancer, more than a singer. On the other hand, Cody is more concerned about singing the song than performing and that may hurt him.

Christina loved the two of them but she was sure that Domo was going to overdo it and she didn’t. Adam is thrilled that Domo reigned it in. Cee Lo picks Cody.

Domo is available to steal since she didn’t make it through the Battle Round.

It’s team Christina’s turn to step into the Battle Round. Aquile will be battling it out with Nathalie Hernandez, they are being mentored by Billy Joe Armstrong and they are singing “You Give My Something” by James Morrison. Nathalie is concerned about being the youngest singer but she is ready to bring it. Christina tells the two of them to mesh well because if they are awkward, the crowd is going to feel it.

Cee Lo loved the rendition, he thinks there is something sweet about Nathalie and Aquile’s performance was perfect. Adam loved their talent and is shocked at Nathalie’s talent at her age, but he does think Aquile is more ready. Blake is amazed at how good Nathalie is already. Christina makes her choice, she chooses Aquile.

Natalie is also available to steal.

On Team Christina, Celica Westbrook and Lisa Scinta battled it out and although we didn’t get to see the performance, Christina picked Celica.

Another battle performance was on team Blake, Rudy Parris and Charlie Ray battled it to continue with Blake, Rudy won.

Another two are ready to battle it out tonight on Team Adam’s Caitlin Michelle and Melanie Martinez. They are being mentored by Mary J Blige and singing “Lights” by Ellie Goulding. Adam finds that Caitlin is sounding a little flat and not bringing it, she also forgets the words.  Melanie is also having an off day, will they both be able to bring it to the stage and blow everyone’s minds with this performance?

Blake thinks it is the hardest time to decide between these two because each of them are their own thing. Christina found it was the prettiest performance and can not choose between the two. Cee Lo likes both of them equally, but he loves Melanie. It’s time for Adam to make his decision on who he wants to continue with him, he chooses Melanie.

Blake and Cee-Lo both want to steal Caitlin, she gets to choose and it’s team Cee Lo for her.