‘The Voice’ Season 3 Episode 4 & 5 Blind Auditions Review: The Good, The Bad and The Really Bad 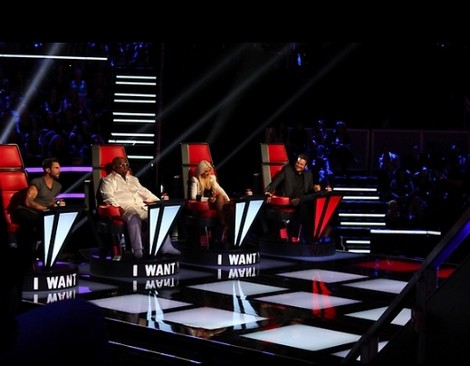 Celeb Dirty Laundry is at it again folks! The Voice’s fourth and fifth blind audition rounds premiered on Monday and Tuesday night, and as per usual, we decided to bring you an unbiased look at the auditions, the vocals and the self-indulgence. These were, by far, the worst audition rounds of the season. No-one, except Avery Wilson, made our eyes twinkle with excitement. Read below our review and let us know in the comments if you agree/disagree. Let’s get to it, shall we?

Melanie Martinez was the first contestant of the night. The soft-voiced singer donned an Andrews Sisters/70’s frock and did a singer/songwriter cover of “Toxic” by Britney Spears. Her voice was wispy, breathy and subtle, with a strong upper register falsetto during the chorus. Her absent pop vibe left the field wide open for an indie and airy performance. She delivered above average vocals, but won the race in sheer quirky appeal. Three of the judges, with the exception of Christina Aguilera, turned around. Melanie chose Adam Levine in the end, as she wanted someone to assist her in expressing her creativity.

The Texan singer Brian Scartocci did a rendition of Stevie Wonder’s “Isn’t She Lovely” and even though the performance started off well, we were left hanging with an affected Adam Levine-esque voice and a nasal cover of Stevie Wonder’s seminal hit. The vibrato became labored during the opening and Brian’s closing notes were complimented with a microphone twirl and a half-baked karaoke split near the end. All three judges, with the exception of Christina Aguilera (she’s up to something…) turned around. If we were sitting in those spinning chairs we wouldn’t have pressed that button even if you held a gun against our heads. Brian chose Adam Levine.

Beat Frequency, a duo of husband and wife, performed a cover of Katy Perry’s auto-tuned “E.T.” Their vocals lacked all forms of artistry, appeal, intelligence and pitch. They were reminiscent of a Russian cover band performing Katy Perry songs at a karaoke bar in Hell. Christina was the only judge who turned around, but her face scrunched up near the chorus with an obvious “FML”. We really do not have high hopes for this duo. Guess who they chose?

Liz Davis, a strong contender to become the country vocalist of this season, was up next with her rendition of “Here For The Party” by country superstar Gretchen Wilson. Liz’s vocals were catchy, lively and effervescent near the beginning of the song, but they quickly filtered out to become the remnant echo of a karaoke bar in Nashville. Yes, her vocals were unusually strong, but somewhere near the fifth phrase of “I am herrreee for the patheee” did her control falter and she was left behind in bad cover hell. And then, something weird happened. Liz’s hair brushing sexuality after the spoken verse came across as contrived and awkward. She ended her animated performance with a long and off-pitch note, to which Blake Shelton swung his chair around and smiled. Liz chose Blake in the end.

JR Aquino, an Anchorage, Alaska native, was the next performer with his rendition of “Just The Way You Are” by Bruno Mars. His happy face and wavering vocals were upstaged (once again) by Christina and Adam’s theatrics on the red buttons. His vibrato snuggled up well with the chorus of Bruno Mars’ above average pop ballad and delivered on his visual promises. Once again, the out-of-tune vocals and karaoke-boy-band-hand-swinging were met with praise by the in-studio audience. Three of the judges, with the exception of Blake, turned around. JR chose Cee Lo Green as his mentor of choice.

Nicholas David, an inspirational musician who went through some tough times in his life, did a self-indulgent rendition of “Stand By Me” by Ben E. King. We’re not sure if we’re losing our minds or becoming deaf from watching too many Kardashian episodes, but what the freak went wrong during Monday’s auditions? Nicholas’ cover of this classic song became riddled with a porn soundtrack arrangement, nasal vocals and a weirdly wispy vibrato at the close of every phrase. Hey, the dude looks like someone we’d hang with when the time is right, but seriously? Cee Lo turned around and Nicholas chose him in the end. Whatever.

The 17-year-old and familiar looking Alessandra Guercio was the next contestant with her cover of “The Climb” by Miley Cyrus. Wasn’t this the same Alessandra Guercio from American Idol? Didn’t she perform in Pia Toscana’s group during Hollywood round? Look, we’re not trying to fool around here, but this Miley Cyrus song is one of the most difficult pop songs of the past few years – not many people are able to pull it off. The song literally “climbs” to a stratospheric height of power vocals. Alessandra’s performance wasn’t the worst we’ve seen (Beat Frequency takes that spot), but she was slightly too inexperienced to make us relate to the lyrics and vocals. The moment Alessandra neared the upper chorus; she delivered an above average vocal, but was it good enough? There’s a reason she didn’t make it on American Idol. Cee Lo and Adam turned around, but Alessandra chose Adam in the end.

Avery Wilson, touted as a 16-year-old phenomenon, was the next contestant to take the stage. He performed a cover of “Without You” by David Guetta feat. Usher. Thank all the gods of music that we saw Avery perform! This is what performing is about – strong, controlled vocals and a kick-butt performance to boot. This was, by far, one of the best performances of the season. Avery out-performed every other contestant of the night. He was reminiscent of a young Usher mixed with the Glee kids. For the first time ever, The Voice became larger than life and reeked of post-Hollywood round American Idol. His deep-voiced vibrato beautifully accentuated each and every note, which made his audition pure, clean and dominant. If Avery doesn’t make it to the finals and/or win, there’ll be hell to play. Good on ya’ boy! All four judges turned around and Avery chose Cee Lo in the end.

The second night of Blind Auditions swung around with several memorable performances. The first contestant of the new night was Collin Mcloughlin, an NYU student who dropped out to pursue his dreams. He did a cover of “Wild World” by Cat Stevens. Collin’s voice was average, mellow and chilled. Collin wasn’t over-the-top, nor was he ever completely in control of his performance. It was a very pub-singing-look-at-me-babe type of performance. All three judges, with the exception of Christina, turned around. Collin chose Adam in the end.

The next successful audition of the night came in the form of Joselyn Rivera (we doubt she has any relation to Naya Rivera “Santana” from Glee). This exceptionally beautiful contestant did a cover of Kelly Clarkson’s “Stronger” and we don’t know what the hype was all about. Look, Kelly Clarkson is one of the best vocalists in the world, so it’s a tough feat to pull of any Kelly Clarkson song, especially “Stronger”. Joselyn’s opening notes wallowed in the Twilight Zone of karaoke and wannabe. Do not get us started on the chorus part of the song… Joselyn just wasn’t up to par, even though Christina and Blake turned around. Joselyn chose Christina in the end. We doubt Christina would be of any assistance in the near future – Joselyn is just not good enough.

Benji was the next contestant to take the stage with his rendition of “Knockin’ On Heaven’s Door” by Bob Dylan. Benji was a stand-out vocalist with the first raspy and subtle note. His gravelly voice had a tinge of Adam Levine near the upper registers and sounded like a warm glass of milk before bed. Several of his notes were closed down with a flexible vibrato near the end, which gave the heavy-handed song a light kindness to it. The moment Benji neared the middle of the song; he broke loose and delivered an Aerosmith-esque scream, which drew praise and excitement from the judges and the audience. Benji chose Adam in the end, after Adam and Cee Lo turned around.

The last contestant of the night was Mycle Wastman, a Seattle based musician who did a rendition of “Let’s Stay Together” by Al Green. The cap wearing, blue eyed singer’s voice was smooth and soulful and held a tinge of nostalgia in the lower register, but Mycle’s song choice was the main irk in the end. Instead of coming across as fresh and unique, he came across as lounge-y and off-Broadway. His vocals were good enough to carry him through the entire performance, but we suspect Mycle’s only chance of survival would be his looks and younger female demographic. All three judges, with the exception of Christina, turned around. Mycle chose Cee Lo as his mentor.

Here’s a recap for the disagreeing folk out there on who chose which mentor:

Please note: Several other less important contestants also made it through on night one and two, but weren’t included in the review.

Here are the judges’ contestant amounts so far:

What did you think? Would you have chosen this list of contestants? Did your heart also break when Beat Frequency destroyed the future of music? Let us know your thoughts in the comments below.