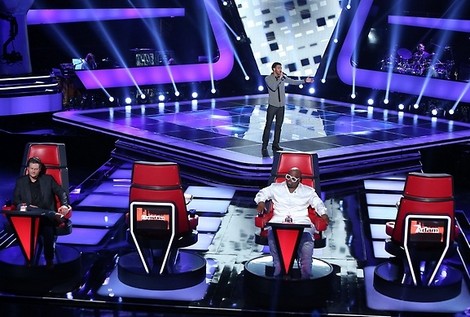 The second episode of The Voice Season 3 premiered last night with another load of hopeful “winners” competing to win the title of The Voice (not that it would do them any good, you know?). After the magnificent premiere episode of the 3rd season, the second part of the blind auditions went off with a bang in the form of Adriana Louise – an above average and overly hyped contestant.

Adriana, a waitress in Brooklyn, popped on the stage in a white dress and red platform pumps (nuh-uh). She resembled a karaoke hybrid of Winona Ryder and Jessie J with her (out-of-tune at times) rendition of “Domino” – which Jessie J murdered with her strong vocals. The ever sentimental closed eyed and humming judges looked as excited as teenagers at a Justin Bieber concert when they swung their chairs around with the popular inscription of “I Want You” at the bottom of their futuristic chairs.  All four judges pressed their red buttons. In the end, Christina Aguilera was chosen by Adriana with the hysterical crying and screaming of Adriana’s mother in the production room…

The second contestant of the night was a former wrestler (yes, according to The Voice, every sad soul and their sister is able to sing) with the name of Casey Muessigman (pronounced “Music Man”). Casey, the cookie cutter country man, did “Sweet Home Alabama” and ten million people fell asleep on their television sets (literally, on top of their television sets). His performance, not one of the worst in history, made fellow country crooner Blake Shelton swing his chair around. Casey’s vocal tone was rich and full, with a few off-key runs near the end of his phrases, which made for an interesting experience. His on-stage choreography (namely “ass slapping”) sealed the deal for Blake and Casey obviously, and eventually, chose Blake as his mentor.

Aquile was the next contestant to gyrate his throat on the stage for the judges. He sang Elton John’s “Your Song” (a song which has very special personal meaning). His voice was warm, full, fluent and emotional, being the first voice of both episodes to truly instill a sense of melancholia and nostalgia in his music. His rendition of Elton John’s famous song was R&B infused with strong and controlled runs near the completion of his phrases – this made for a powerful experience. Christina and Adam Levine pressed their buttons and swung their chairs around. Cee Lo Green quickly followed suit, with only Blake not having pressed his button. In the end, Christina was the chosen judge. We are rooting for Aquile this season, without a doubt.

Two other contestants followed suit, with Ryan Fogarty (a former tour manager for LeAnn Rimes) not having made the cut and Mackenzie Bourg, who did a folk infused rendition of Foster The People’s catchy tune “Pumped Up Kicks”. He was paired with Cee Lo Green after his quirky performance. The final contestant of the night came in the form of a mariachi singer named Julio Cesar Castillo (we all know how popular Julio Iglesias was) who did a feverish rendition of Ritchie Valens’ “La Bamba” which prompted Blake Shelton and Cee Lo Green to spin their chairs around. It was a surprising twist to see someone stay true to their heritage and to not wallow in the pitiful mourning of another Adele/Katy Perry cover. Julio’s voice was exciting, catchy and feverish – this truly made the second episode of The Voice Season 3 a winner in our books. Blake was the mentor who won the mariachi man in the end.

To use as a reference, here’s the paired mentor/contestants of the second episode: