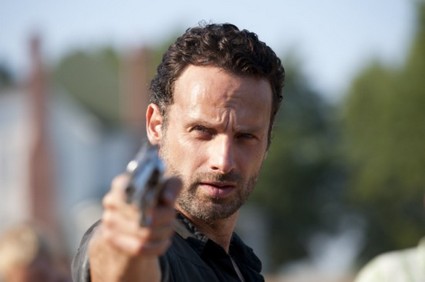 Tonight The Walking Dead returns with a whole new episode called ‘Nebraska.’  Stay tuned as we live blog the show with all the up-to-the-minute results. I feel like the show is ALWAYS on hiatus. First fans had to endure the longggg break after a 6-episode season (as if that wasn’t upsetting enough); we were treated to an amazing return to only have the show go back on ‘a break’.

Tonight’s episode, entitled “Nebraska”, introduces 2 new characters.  Something tells me that a whole new gaggle of folks are to be expected – it is after all a zombie apocalypse. So enter these 2 new fella’s after Rick is trying to talk some sense into Hershel – who appears to be drowning his sorrows in booze.

Rick and the others try to restore order in the aftermath of a terrible discovery. Hershel takes up an old habit and disappears, Rick and Glenn must follow him into town.

We will be live blogging the show with all the up-to-the-minute details at 9PM EST so make sure to come back to this spot and watch the show with us. While you wait for the recap you can watch a sneak peek video of the episode here!

RECAP: Hershel wants everyone off his land, Shane and Rick argue about the killing of all the Walkers and Rick tells Shane that Hershel believes that he just killed all his family.

Glenn asks Maggie if she knew that Sophia was in the barn – she doesn’t answer but he tells her at least now they can bury her and move on.

Carl is upset that they found Sophia and she was a Walker, Lori asks Dale to take him to the house and rest, away from all the dead bodies on the ground.

Lori takes charge, she tells everyone to bury the ones they love and burn the rest. Rick tells Lori that Hershel wants everyone off the farm, or at least Shane.

Rick is really upset that he was just chasing a ghost in the forest all that time when he was looking for Sophia.

Shane is pissed off, he has it out with Dale because he didn’t pull the trigger to kill any of the walkers.

Daryl tries to talk Carol into heading over to the graves, they have been dug and everyone is ready to have a memorial for Sophia and their other loved ones, but Carol tells him that her daughter was the little girl that went into the forest, not the Walker.

Lori has a melt down in the forest by herself while everyone else is loading bodies on the pickup to burn them. Dale doesn’t believe they should have shot all the Walkers and cause such a panic, he tells Lori and Rick.

Maggie asks Glen that if his group left, would he stay and he tells her that this really is not the time to talk about it. A loud crash finds Beth having passed out and Hershel has disappeared, Glen and Rick decide that they are going to go look for him. Lori and Shane try to stop Rick,  she tells him that Carl needs a father alive because he is turning cold, he told Lori that he would have shot Sophia himself.

Rick and Glen are gone, Shane finds Carol coming out of the forest. Shane tells her that he shot all the Walkers because he just wanted to keep everyone safe and that he didn’t know that Sophia was in the barn.

Dale tells Lori that Shane is dangerous and he thinks Shane shot Otis, he can’t prove it, but he thinks he shot him and left him for bait for the Walkers. Dale thinks sooner or later, he is going to shoot someone else.

Glenn and Rick are in the car and he tells Rick that Maggie loves him and the problem is, he didn’t say it back cause he’s not used to saying it, only to his mom and sisters. Rick tells him to enjoy it. They finally arrive in town, Glenn tells Rick that he knows about Lori being pregnant and he’s sorry that he kept it from him.

Meanwhile, back at the house, everyone is looking in on Beth who is burning up and her heart is racing. Lori asks Andrea to look in on Carl while she heads out to talk to Daryl, she wants him to go look for Hershel as well and he refuses, he’s not looking for people any more after what happened to Sophia.

Rick and Glenn find Hershel in a bar, he is drinking. Rick explains that Beth collapsed, he thinks she is in some kind of shock. Hershel tells Rick that he was a fool, he thought miracles existed.

Lori gets in a car and heads to town, she is reading a road map when she hits a Walker and her car hits the side of the road, turns over and smashes to a stop.

Rick tells Hershel he promised Maggie that he would bring him home safe. Hershel gets angry, tells Rick that he and his group destroyed everything. Rick tries to persuade Hershel to leave and he tells him that he finally realized there was no hope with the Walkers and they all know it now. Rick tells him that nothing has changed, death is death, whether it be cancer or Walkers.

T-Dog and Shane are building the stack of Walker bodies to burn.

Two guys arrive at the bar, Dave and Tony from Philadelphia, they know Hershel. They sit down with the guys and share a drink and toast to the dead. They were headed to DC, but they couldn’t get there because the roads were jammed. They tell them that there is no way out of this mess, they ask where they are stationed at and Rick tries to evade the question. Dave asks if they have a farm and Rick still doesn’t answer them, meanwhile Tony heads to another part of the bar and just pisses on the floor. Dave wants to pool their resources and join their group and both Rick and Hershel tell him that they can’t. Dave tries to pull on Rick’s sympathy strings to get him to change his mind and Rick tells him no again. Tony gets angry and calls them assholes, Dave calms him down and pours a drink. Rick tells him that the farm is too crowded and they don’t have anymore room, when Dave tries to go for his gun, Rick shoots the two of them dead.

While Rick, Glenn and Hershel are in the bar, Shane is lighting the torch to burn the Walker bodies.

Tonight’s episode is done and I am left wondering what the hell happened to Lori, I can’t believe they left us wondering, ugh!