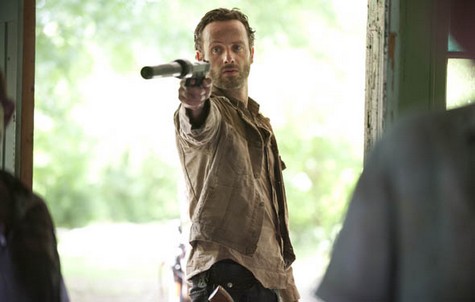 Tonight is the highly anticipated season premiere of Season 3 of The Waking Dead and the episode premiere  is titled “Seed.”   Last season ended with an ominous looking prison in the distance, and in the season 3 premiere we’ll see Rick Grimes (Andrew Lincoln) & Co. in the prison, many months later.  ‘They jumped for many months later. “They jump forward in time,” says Lincoln. “You see we’ve hardened.   We’ve become this much tighter, more brutal and self-sufficient outfit.”  They’ll need to be.

Not only must they clear the jail of zombies to make it a home for still-pregnant Lori (Sarah Wayne Callies) and the group, there is a new (human) enemy to deal with, too: the Governor (David Morrissey), who rules the town of Woodbury with something of a messiah complex.  “He thinks of himself as a man whose time has come to save humanity,” says exec producer Gale Anne Hurd.  “I don’t think he would say the zombie apocalypse was a good thing, but he’s certainly the man to help recreate civilization as he sees fit.”

Official summary of tonight’s episode: “With the world growing increasingly more dangerous and Lori’s pregnancy advancing, Rick discovers a potentially safe haven. But first he must secure the premises, pushing his group to its limit.”

Tonight’s episode: Last season we found out that everyone is infected and we briefly met the new character, Michonne.

Tonight’s new season starts off with Rick, T-dog and Carl, now toting a gun, finding Daryl in a house. Lori is huge, she looks like she is about to give birth at any minute. Maggie and Glenn are also there, along with Beth, Carol and Hershel. All of a sudden, everyone grabs their stuff and run out of the house into different vehicles and leave.

Hershel is concerned about all the moving about, he doesn’t think that Lori can take any more in her condition. Daryl and Rick head out to scope a new area, a prison. They cut the fence and get through just in time for the walkers to all came racing towards them. Rick thinks it is a perfect area, they just need to take on some more walkers to get through to the front building. Rick heads out alone amongst all the walkers to get to the front of the building while everyone else distracts the walkers. Since last season, everyone has become expert sharp shooters.

All the walkers are either shot or got axes and poles throw their skulls, the rest of the group is safe to walk across the grounds to the meet up with Rick to the entrance of the prison.

It’s night fall and Daryl is outside standing watch while everyone else is sitting by a fire and having dinner. Hershel is excited about the soil at the prison, he thinks they can grow vegetables on it. Beth assures Lori that this is a safe place for her to have the baby. Carol’s shoulders are sore from shooting the rifle, so Daryl gives her a massage and they joke about screwing around.

Hershel wants to hear a song sung by Beth, but she doesn’t think anyone wants to hear. Carl encourages her to sing, so she does with Maggie soon joining in. Rick tells everyone to turn in, he’s going to keep watch overnight. Rick thinks there maybe supplies in the prison because the walkers are dressed like guards and prisoners, so it looks like the prison was taken on early on.

Lori is hilarious, she keeps holding on to her belly like her baby is going to fall out. Lori approaches Rick and tells him that the baby is going to be here soon and they need to talk about things, but he doesn’t want to.

On to our newest character Michonne, she just walked into a general store and sliced up three walkers. Back to the prison, five of them; Daryl, Lori, Glenn, Rick and T-dog are killing more walkers so they can get themselves closer to the main building while the rest of the group distracts some of the walkers. Some of the walkers prove to be trouble as they are dressed in S.W.A.T. gear and a little harder to kill.

Daryl opens a door and Rick heads inside the prison. The five are finally inside and it looks deserted for the most part, everyone is looking around. Rick finds a dead guard and takes his keys which opens the door and allows the group to look around more. The group secure a cell block, the rest join the five inside. Everyone walks around until they choose a cell to call their own and get some sleep. Daryl refuses to be locked up in a cage and instead finds himself a place in the block that is not in a cell and camps out for the night.

Back to Michonne, she now heads inside a sportsman shop that appears to be her hang out. We find Andrea inside and Michonne tries to get her to drink some water. Andrea tells Michonne to leave her alone, she can take care of herself, she doesn’t want Michonne in danger. Andrea is clearly sick and knows that if they don’t move on, she will die there. Andrea and Michonne head out.

Back at the prison, the guys finds some ammunition that they can probably use on the walkers. Carol walks in and tells Hershel she needs him to attend to Lori.

The men all leave, with Maggie, to scope out the rest of the prison, with Carl staying behind to protect the women. Lots of walker skeletons and Glenn keeps drawing arrows on the walls so they know which way to go back. All of sudden, the group is taken over by dozens of walkers. Everyone runs and some hide inside a room, but they have lost Maggie and Glenn. Hershel heads out in one area looking for them and gets bitten by a walker. There is only one way to keep Hershel alive, Rick takes out an axe and amputates the bottom portion of Hershel’s leg. All of sudden, the group looks up and there are other humans behind a fence looking at them.