The Women Of ‘What To Expect While Expecting’ Cover Redbook 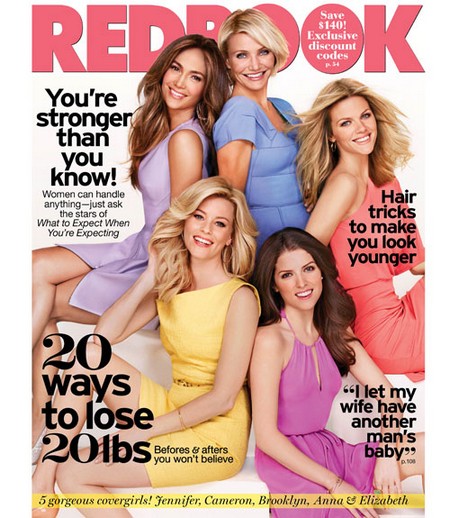 If you’re a fan of the popular book, “What to Expect While You’re Expecting,” you’re no doubt looking forward to the film adaption which hits theaters May 18th.  The movie was inspired by the Heidi Murkoff and Sharon Mazel book and stars Cameron Diaz, Jennifer Lopez, Brooklyn Decker, Anna Kendrick, Elizabeth Banks – to name a few!

The ladies got together recently to shoot the June issue of Redbook, and were all smiles as usual, while sharing with us their thoughts on motherhood.

Cameron Diaz, who in the film is expecting with Glee’s Matthew Morrison, discuss’ her feeling on the pressure to have kids:

“I’m sure a lot of people would expect that I would have had a child by my age. But it’s not what I’ve wanted out of my life thus far. We still live in a largely chauvinistic world. There’s a box people put themselves in, and when you [live] outside of it, that makes them uncomfortable–they have to look at themselves and question their own choices.”

Jennifer Lopez opens up about the balancing act being a mother and juggling work:

“My sanctuary is my bathtub. That’s really the only time I get to myself. It’s usually around 15 or 20 minutes, but for me, those minutes are like heaven on earth. Sometimes I even say a little prayer while I’m in there. I’m like, ‘Lord, help me get through this day!’”

She also talked about what it was like for her after the birth of her twins, now 4:

“I remember after the babies were born, about seven to 10 days in, I was like, ‘What is going on with me? I felt sad and depressed and thought the babies didn’t love me. I actually remember picking up the book to try to see what was happening to me.  And it said how you have this huge hormonal drop about seven to 10 days after you give birth. It’s called the ‘baby blues.’ But I just thought they didn’t like me!”

Elizabeth Banks, who just welcomed a baby via a surrogate, opened up about the ‘right’ time to get pregnant:

“I definitely don’t think [you have to wait for] a right time. I mean: Why wait? The Chinese believe that if you have a baby, what you want comes together even better. You just do it, and make it work.”

Brooklyn Decker, 25, is married to tennis star Andy Roddick and said that she’s only willing to have children with a partner who will be hands-on.

“I would hope I’m in a position where I have a guy who is going to be helping me all the way through – even when I’m moody and craving ice cream at 12 a.m., It didn’t take me long to know that Andy was the guy I was going to marry, and [what kind of dad he’d be] absolutely went through my mind when making that decision.”

Well, there you have it – I’ve never read the book but am definitely going to give the movie a go – judging from the trailer’s and the amazing cast, it looks to be pretty entertaining.